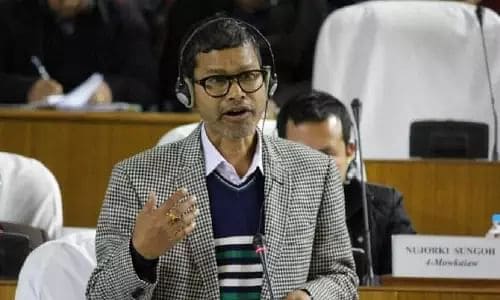 Shilong: Meghalaya home minister Lahkmen Rymbui on Thursday informed about the illegal migrants in Meghalaya. He stated that 116 Bangladeshi illegal migrants had been detected in the state from 2018 till August 31, 2021.

Rymbui said that over 16,000 migrants had been thrust back to Assam. He added that out of 116 Bangladesh citizens, 44 are presently in jail, while 72 have been deported.

“I would like to know whether the government has initiated action to identify the vulnerable areas through which infiltration is happening?” questioned Sangma, to which Rymbui stated the state government is doing that on an as-necessary basis.

Furthermore, Mawsynram MLA HM Shangpliang also drew attention to a crucial matter on an infiltration post in Hatmawdon in the Mawsynram constituency.

He also described how numbers of Bangladeshi citizens would come in and cut apart all betel nuts from the plantation on the side of Meghalaya throughout the winter season.

Share
Facebook
Twitter
WhatsApp
Previous articlePM Modi turns 71; from Ram Nath Kovind to Himanta Biswa Sarma, have a look at who wished him
Next article“Act like you are crying”: YouTuber faces backlash after she forces her son to cry on camera