3 Congress Workers, on way to the Navjot Sidhu Event, were Killed in a Bus Accident 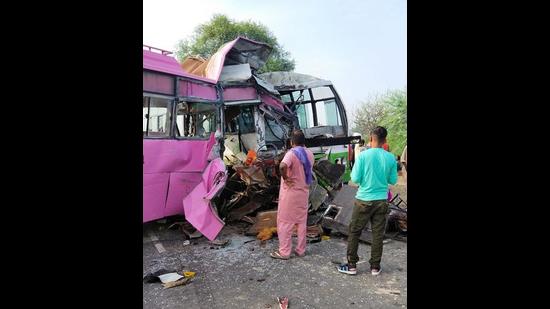 Three Congress workers heading towards Chandigarh to attend the swearing-in ceremony of Navjot Singh Sidhu as Punjab unit chief was killed and more than 10 were injured when two buses collided at Lohara Chowk in Moga on the Jalandhar-Barnala road on Friday morning.

Police said the accident took place around 7.30 am and the injured were rushed to the civil hospital in Moga. Senior medical officer (SMO) Dr. Sukhpreet Brar said: “Three people have died so far. The condition of some the injured is critical due to the impact of the collision.”

The victims are supporters of Congress MLA Kulbir Singh Zira and were headed from Zira, 15km from Moga, to the Punjab Congress Bhawan in Chandigarh for the installation ceremony of the state Congress committee.

The Punjab Roadways bus with which their vehicle collided was going towards Jalandhar.

Condoling the deaths, chief minister Capt Amarinder Singh tweeted: “Saddened to learn of the bus accident in Moga district in which three Congress workers have died and many are injured. Have directed the Moga DC to immediately provide full medical treatment to the injured and to send a report to the government.”