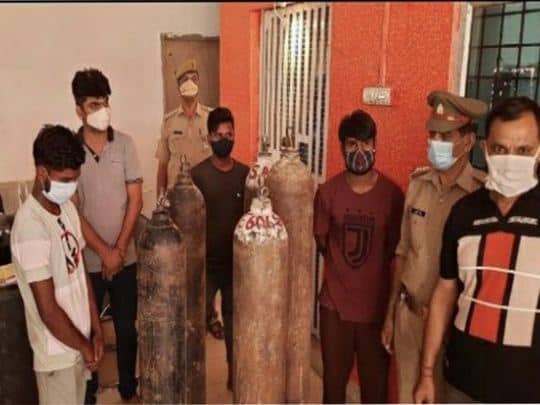 Lucknow: Lucknow police authorities have arrested 10 people for their involvement in the black marketing of oxygen cylinders during this time of Covid 19.

According to the official statement, at first, police, have arrested two persons, Karan Bharadwaj and Nekram, in the Jankipuram crossing, with 115 oxygen cylinders. The police recovered the other 87 oxygen cylinders and Rs 1 lakh from the accused.

In Gomti Nagar Extension, police have arrested Ikram Ali of Sultanpur and Ayush Shukla of Vishwas Khand. Cops said they used to secure fake receipts for the purchase of nitrogen gas. They have also sold oxygen cylinders at higher prices.

Additionally, police said that there were many such cases found during this surge of Covid 19.