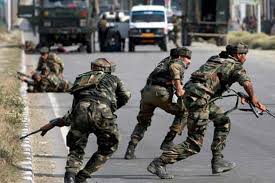 Srinagar: A J&K policeman was killed while another injured in an encounter between militants and security forces in Budgam district.

A cordon was launched by the security personnel and a search operation conducted in Zanigam village in the Beerwah area of the district following information about the presence of militants there, officials said.

The search operation later turned into an encounter and a heavy firing ensued between the militants and the security personnel in which two policemen got injured. They were rushed to a hospital for treatment but one of them succumbed, the officials said.