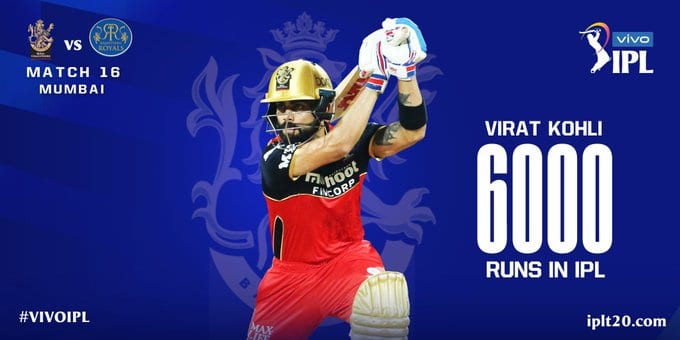 Bengaluru: Royal Challengers Bangalore (RCB) captain Virat Kohli became the first batsmen in the IPL history to score 6000 runs. The terrific batsman created a milestone during RCB’s 10-wicket thrashing of Rajasthan Royals (RR) in IPL 2021 on Thursday. Kohli scored his first half-century of the season, as he hit six fours and three sixes en route to his 47-ball 72.

Suresh Raina, who is next in the line after Kohli for the most runs by a batsman in IPL, was one of the first to congratulate him on his feat.

“This is HUGE, meet the first ever player to reach 6000 runs in IPL,” Raina tweeted, tagging Kohli.

Last season, Virat Koli had taken over Raina as the tournament's leading run scorer after the later pulled out of the competition.