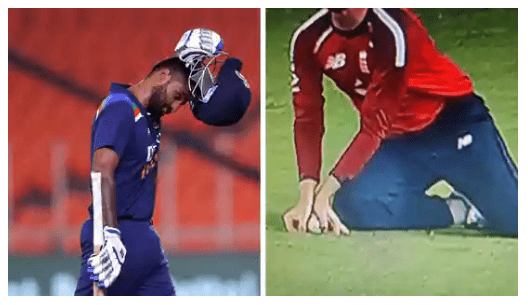 Ahmedabad: After a terrific comeback in the series against England, winning by 8 runs in the fourth T20I match held at Narendra Modi Stadium in Ahmedabad to level the series at 2-2, a disheartening umpire decision left everyone aghast.

The game witnessed some terrific batting from Suryakumar Yadav who made his debut in the second T20I along with Ishan Kishan. He couldn't get a chance to bat in his first match but on Thursday, he performed brilliantly and hit his maiden half-century in his first outing.

However, the way he got dismissed ended up creating quite a controversy after he was caught off Sam Curran by Dawid Malan at fine leg. Contrastingly, the replays showed that the ball had burst through Malan’s hands and touched the ground before the fielder got control of it eventually.

Even after repeated replays, TV umpire Virender Sharma couldn’t find out any dint of proof to show the ball had touched the ground and that it wasn’t a legal catch and thus Suryakumar had to walk back to the pavilion.

This controversial dismissal sparked the soft signal debate as many former cricketers questioned the rule.