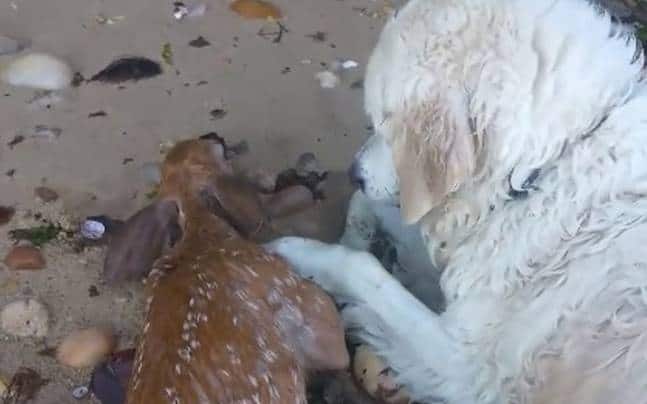 Ralph Dorn, a resident of Virginia, US, recently took to Facebook to post pictures and videos of his pet dog saving a drowning fawn.

Dorn couldn’t find his pet Goldendoodle, Harley, one evening until he finally looked out at the lake. Harley was in the middle of the water herding a drowning fawn back to the shore. However, that wasn’t the end of their rendezvous.

A few days after the incident, Dorn found Harley getting restless and running from window to window. When Dorn opened the front door, he claims “Harley ran into the tree line and found the fawn”. The fawn then “stopped bleating, tail wagging, they touched noses, sniffed each other and Harley came calmly back to the house with me,” reads the post made by Dorn.

Since being shared on June 5, the post has received over 2.5 lakh shares 1.2 lakh reactions, and a lot of comments. Several netizens praised the dog, while others found the incident heartening. “That's just incredible! Harley is the best dog!” one commented. “This is one of the sweetest things I have ever seen. Good job Harley!” another shared. “Absolutely the best thing I've ever seen on Facebook!” shared a third. “He's a hero! What a wonderful boy!” exclaimed a fourth.