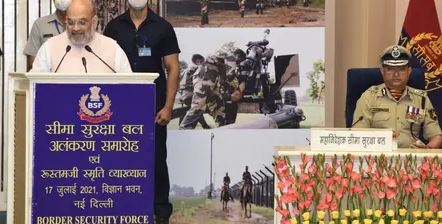 In the context of the recent drone attack at Jammu airbase, Amit Shah said that the DRDO and other agencies are coming up with countermeasures. “We have to prepare for use of artificial intelligence and robotics by Pakistan based terror groups. This goes beyond the use of drones for attacks from across the borders,” Shah added.

He was speaking during the Border Security Force’s (BSF’s) investiture ceremony. The Union home minister also felicitated personnel of BSF for their service to the nation and also delivered the Rustamji Memorial Lecture.

Amit Shah tweeted about the ceremony on Friday.

“Looking forward to felicitating our brave BSF personnel for their outstanding service to the nation, tomorrow, at the 18th Investiture Ceremony of this valiant force. Will also deliver the Rustamji Memorial Lecture,” Amit Shah posted on Twitter.

The legendary and one of modern India’s most celebrated Police Officer popularly known as the Founding Father of BSF… The extraordinary vision & steadfast leadership of Shri K F Rustamji shaped BSF early in its existence. His charismatic personality later made BSF into a formidable fighting force. He has a special place in the hearts of all Seema Praharis protecting the borders of our nation,” BSF said in a tweet.

BSF was raised on December 1, 1965, with 25 battalions and now the force has more than 265,000 personnel with 192 battalions including three disaster management battalions.