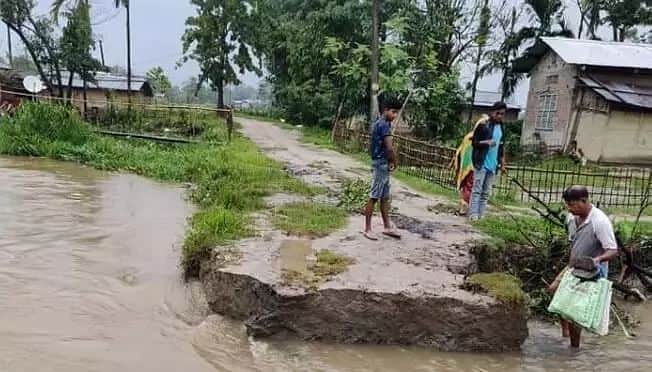 Guwahati: At least 1.33 lakh people are affected by the worsening flood situation in 11 districts of Assam. As per a report of Assam State Disaster Management Authority (ASDMA), the state has been hit by late floods due to a delayed monsoon this year.

Officials taking stock of the prevailing situation have recorded over 7,584 hectares of cropland destroyed in the floods.

The statement further added that 243 villages are affected and 74 relief camps have been set up for the help of flood-affected people.

Many roads, bridges, embankments, culverts, and other infrastructure have been damaged by floodwaters in several districts, the ASDMA bulletin added.

It may be noted, due to the incessant rainfall in the state for the last few days, several prominent rivers are overflowing and have crossed the danger mark. Local administrations have sounded flood alert in the lower bank areas, cautioning people not to venture out for fishing and driftwood collection.

Share
Facebook
Twitter
WhatsApp
Previous articleConviction of telling a story is what sells a film to an actor: Actor Neha Sarma
Next articleIndia vs England 3rd Test, Day 3: India fights back as Pujara nears century