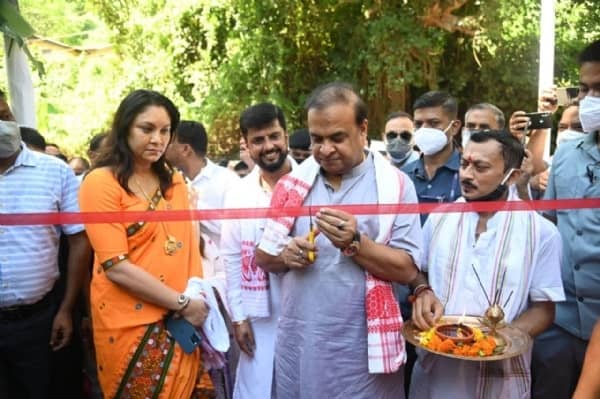 The responsibility for the reconstruction of the conference hall has been taken up by a well-known social worker Anupam Sarma, and Sanjive Narain, CMD of Prag News.

Further, a small park with a pond was also inaugurated by Assam Chief Minister. The park was recently developed by the CMD of oldest News Channel of the North East region, Sanjive Narain at Basistha Bhootnath Crematorium Kali Mandir region.

While addressing the local crowd in the venue, Chief Minister Sarma stated that temples and Devalayas are vital in terms of religion and history.

He additionally called them the expression of our cultural identity and affirmed the significance of preserving, defending and sustaining their infrastructure.

The Chief Minister additionally highlighted the historic and mythological importance of the Basisthashram Devalaya. The Assam CM likewise exhibited its design to conduct various tourist and pilgrim cooperative services at the Devalaya.

The Chief Minister further appreciated the measures exercised by social worker Anupam Sarma and CMD of best and leading Assamese live news channel Prag News, Sanjive Narain for promoting the infrastructure of the Devalaya and acknowledged them for their initiatives.