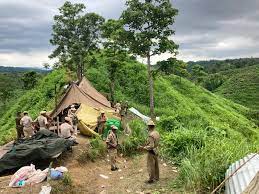 The situation along the Assam-Mizoram border continued to remain tense on Friday and obstruction of the national highway to Mizoram by residents on the Assam side persisted for the third day.

On the July 26 morning that is on Tuesday Assam Chief Minister Himanta Biswa Sarma shared a press release from the government of Assam on the border tense.

The press release said that Mizoram began construction of a road towards Assam destroying the Inner line Reserve Forest in Lailapur and also set up an Army camp of the neutral force, CRPF, at the same time.

To diffuse the situation and resolve matters, Assam Police went to the area this morning to request Mizoram not to disturb the status quo.

But sadly, the Mizoram miscreants that were supported by the Mizoram Police started attacking the Assam Police officials leaving the IGP injured in this barrage.

Mizoram security personnel present in large numbers on the disputed border areas have started construction activity and Assam has responded by setting up new border outposts.

Movement of vehicles on the NH 306, which has been blocked by residents of Lailapur in Assam’s Cachar district since Wednesday seeking removal of the neighbouring state’s security personnel from Assam territory, continued to remain paralysed.

On Friday, Assam’s forest minister Parimal Suklabaidya visited the border areas and interacted with residents. He assured that the government is taking steps to resolve the border dispute soon.

The minister visited the newly set up border outpost (BoP) at Singua and assured residents that two more BoPs would soon be set up at Tulartal and Baghewala areas.

“Residents on the Assam side of the border are agitated and scared. A school along the border was recently destroyed by miscreants from Mizoram and their troops have entered our territory. People are blocking the highway till Mizoram troops withdraw,” Suklabaidya told HT.

“The Mizoram side had earlier assured them they will withdraw their personnel from Assam territory, but that hasn’t happened. Instead, they have started construction on the occupied areas. We are planning to turn the Lailapur check post into a full-fledged police station,” he added.

Senior police officials in Assam’s Cachar district maintained that the situation was tense but under control.

The Assam Government is sad about how it has been blamed on Assam that the aggression and intrusion came from the Assam side although it left 5 killed and no casualties from the Mizoram side.

The Assam Government is committed to maintaining peace and cordial relationship with the neighboring states while restoring relations with them. It further requested the Mizoram Government to restrain from indulging in any kind of violence and work towards restoring peace.