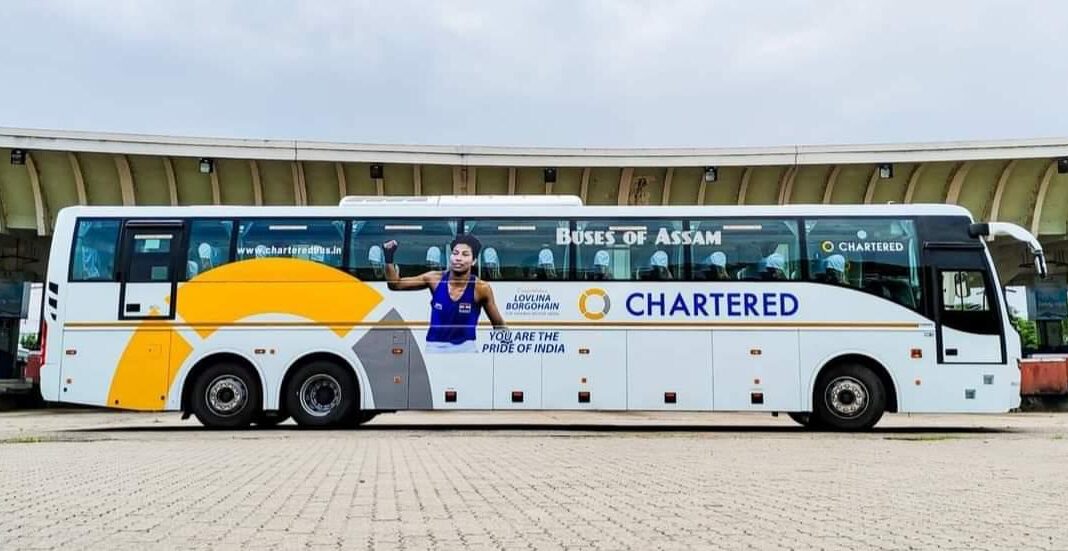 Guwahati: The entire state of Assam and India is proud of Lovlina Borgohain’s terrific campaign at the Tokyo Olympics, with her Bronze medal-win and the first from the state to win a medal at the Olympics.

To honour her magnificent achievement, the Assam State Transport Corporation (ASTC) introduced the latest customized chartered bus with her advertisements as a gesture of honour.

As per sources, the bus is presently kept in Inter-State Bus Terminal (ISBT), Guwahati. The chartered bus will be showcased to welcome Lovlina at Guwahati Airport on August 12, 2021. The bus will bring Lovlina from Guwahati airport to Vivanta Taj, Guwahati.

Following inter-district movement will be resumed, the bus will cover the route between Siliguri- Guwahati. However, the official notification regarding the availability of the bus for the public is yet to be released.

The chartered bus is designed with white, grey and yellow shades, giving it a classy appearance. The picture of Indian Olympic medalist Lovlina in her blue jersey is picturized. It also includes a quote stating, ‘ YOU ARE THE PRIDE OF INDIA’

A few days back, after Lovlina’s win, she was presented with a lifelong free travel pass by bus proprietors of Assam. The Association of bus owners of Assam, AALBOAA, feel privileged to offer her free travel passes.

Additionally, one of the top meat production companies in Assam, Symbiotic Foods, declared a free slice of Gahoree for Lovlina for the next five years.