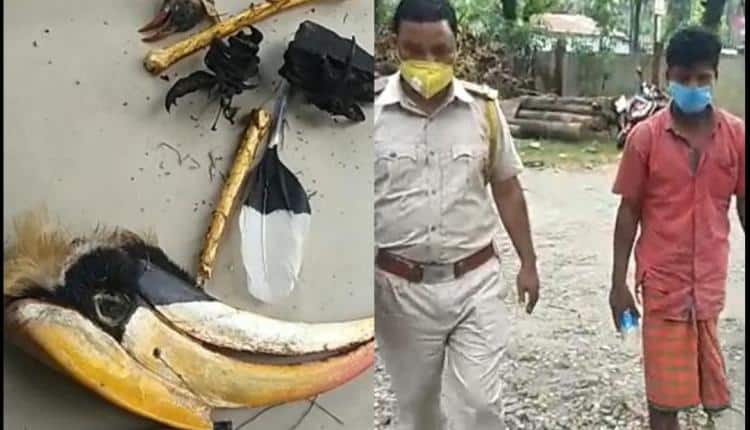 Baksa: A man identified as Dewan Soren, 28, was apprehended by the Assam police after he was found carrying bows and organs of various animals from his possession. The accused is a resident of Dongargaon Village of Tamulpur who was arrested by the Assam Police after acting on a tip-off.

A Casque of a hornbill bird (an endangered sub-tropical bird) has been recovered from the man’s possession along with the arms probably used to kill the bird, along the Indo-Bhutan Border near Tamulpur subdivision Baksa district.

Hornbills are a revered class of birds with their habitat being Africa, Asia, and Melanesia. They are recognized by their large beaks with royal nature colours, perched on top branches of the sub-tropical trees having a down curved head. The birds have fallen to illegal poaching and logging due to their brightly coloured feathers and beaks, which fetches huge prices in the illegal international markets after being smuggled by the poachers.

The operation was carried out jointly by the Troops of the 24th Battalion of SSB, Rangiya, and forest officials of Kumarikata following which the poacher was arrested.