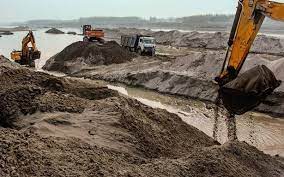 The Bihar government is amending the mines rules to provision for a tariff of heavy fines following the seizure of vehicles involved in illegal sand mining, which has shown no sign of abating, leading to environmental hazard and revenue losses.

Under the new rules, trucks transporting illegally mined sand will be released on payment of ₹4 lakhs in fine and tractors for ₹25,000. This will be in addition to the penalty imposed on the seized sand.

Attempts to regulate the sand mining trade since 2016 have failed hugely despite the formation of a new policy and attempt to cancel the mining lease of 25 companies owned by powerful people, who are believed to operate in collusion with politicians, police, and officials of mines.

Patna, Saran, Bhojpur, Aurangabad, Kaimur, and Rohtas are some of the worst-affected districts. Sand in Bihar is being sold for as much as ₹30,000 to ₹35,000 per truckload.

Sand mined from the nearby Sone River in Patna and Bhojpur districts is shipped to Chirand in boats to be smuggled to north Bihar and neighboring districts of Uttar Pradesh. According to locals, around 90% of the population in Chirand village are engaged in sand smuggling.

Saran SP Santosh Kumar claimed that 35 FIRs against 357 persons were lodged in May for illegal sand mining and 39 were arrested; 576 vehicles were seized apart from a collection of ₹4.28 crore in fines.

Similarly in Bhojpur district, the police claimed to have seized 324 vehicles, lodged 49 FIRs, and arrested 94 persons.

Besides this, the station house officer (SHO) of Barhara police station and 5 constables were suspended on May 28 on the charges of collecting money and protecting the vehicles carrying illegally mined sand.

In adjoining Rohtas district, altogether 1,056 vehicles have been seized since January this year. Rohtas police chief (SP) Ashish Bharti said two additional police camps have been set up to check illegal mining in the district.

This year the police have so far lodged 159 FIRs, arrested 116 persons, and collected a fine of ₹3.79 crores.

In Aurangabad, over 75 trucks and 175 tractors engaged in the transportation of illegal sand were seized from Barun, Obra, and Daudnagar police stations in the district between May 1 and June 20.

Covid19: Section 144 Imposed in Mumbai, Night Curfew to Continue till 5 am