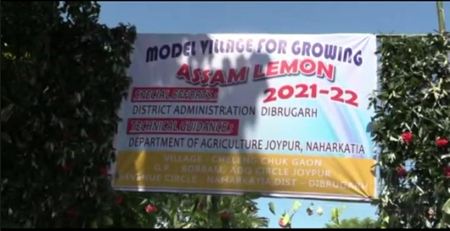 Naharkatia: Lemon, one of the most important crops of Assam and other parts of North East region, has reached foreign shores for its unique medicinal benefits and culinary uses. Its agri and livelihood potential has attracted a many to engage in lemon farming.

Many have scripted success stories, have become self reliant from lemon farming. Amid this, the Dibrugarh Administration in collaboration with department of agriculture, Joypur have declared Chelengchuk, a model village, in Naharkatia under Dibrugarh District, for future economical pursuits in lemon farming.

The district commissioner of Dibrugarh, Pallab Gopal Rai, formally made the announcement while highlighting the farming potentiality and future business opportunities the youth will get from lemon farming.

“I think this place has the potential and capabilities. There is optimum scope for lemon farming. Hence Chelengchuk has been designated as a model village, which sees a great scope for livelihood for the youth. This place is already well known for its lemon plantation. A training will be given to the youth to optimize their skills and increase lemon production,” said the district commissioner of Dibrugarh.

Pallab Gopal Rai planted a lemon sapling before declaring the area as a ‘Model Lemon Village’. The district administration will set up skill training schools, along with monetary aid to women self-help groups for engaging people of all gender to make this model village a truly ideal village for lemon farming.

Meanwhile, Assam’s ‘Kazi Nemu’ has already made its foray in the international market. Assam’s ‘Kazi Nemu’, a variant of lemon endemic to the Northeast India, is now widely available in various supermarkets of London. The Kazi Nemu availability in London is one of the great news that has been brought to the British country.