In a first, elusive clouded leopards spotted at 3,700 metres in Nagaland mountains 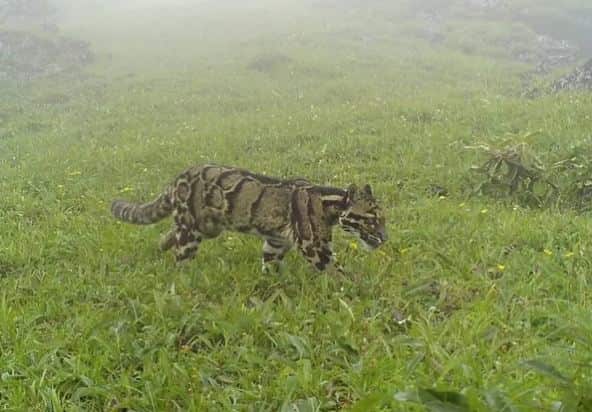 Kohima : In a rare sighting, elusive clouded leopards were spotted majestically moving around at an elevation of 3,700 metres in a community-owned forest in the Nagaland mountains, along the Indo-Myanmar border.

Confirming the sightings through photographic evidence, a team of researchers studying this species were amazed to have found this wild cat in one of the highest reported altitudes in the world to date.

The findings were published by the team of researchers, in the Winter 2021 issue of the Cat News, the IUCN/Species Survival Commission (SSC) Cat Specialist Group’s biannual newsletter.

Also read : Dog loiters around hospital premises to catch a glimpse of his brother being treated inside

The images of the wild cats were captured in the community forest of Thanamir village in eastern Nagaland’s Kiphire district.

“In total, two adults and two cubs have been captured behind lenses. Two distinct individuals were photocaptured at a camera placed above the tree line at 3,700 m close to the summit of Mt. Saramati. Another individual was photo captured at 3,436 m,” the report said.

Very little data is available for this mystic yet stunningly beautiful animal. These clouded leopards are usually found in tropical rainforests, “full of trees”, but “we have found them at heights above where the trees end,” Nijhawan, a conservation anthropologist who works in Arunachal Pradesh, was quoted as saying by IE.

Also read : What will be the future of students in a world of Coronavirus?

The report further added, “All high elevation records are from summer months suggesting that clouded leopards may seasonally expand their range upwards as snow recedes and higher ridges attract prey.”

The sighting of these elusive clouded leopards have attracted the attention of many local environmentalists, who are trying to study about this wild cat.

Share
Facebook
Twitter
WhatsApp
Previous articleWhat will be the future of students in a world of Coronavirus?
Next articleCovid home testing kits: Learn how to use the app, user registration and others