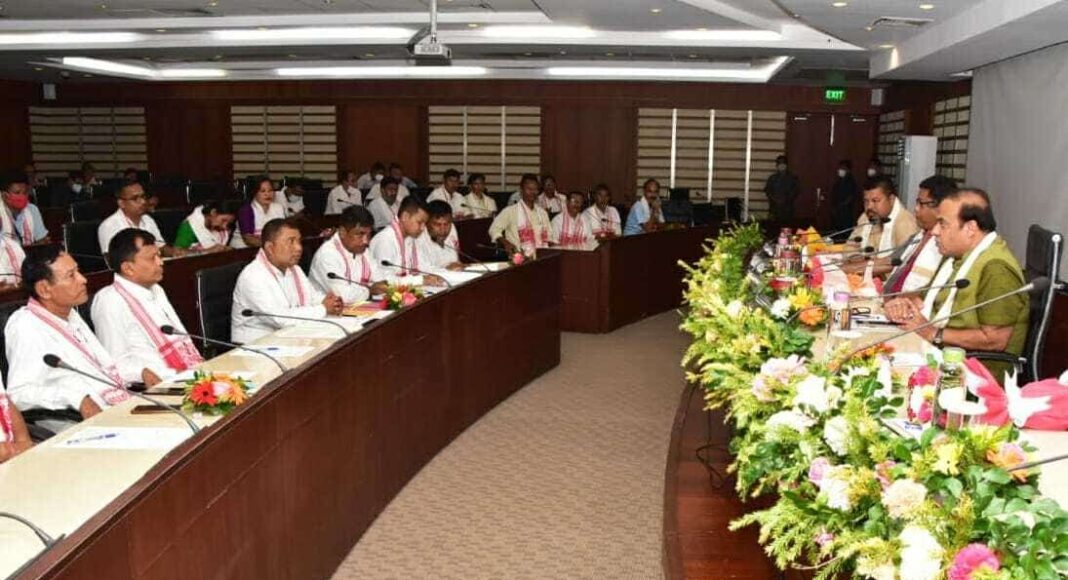 In the meeting, CM Sarma discussed about the longstanding issues of the community and prepares a roadmap to bring about lasting solutions to their problems.

Minister of Education RanojPegu and MLAs Balin Chetia and Suren Phukan were also present in the meeting.

Regarding ST status to the community, CM Sarma said that the State government has already agreed in principle to send recommendations to the Central government.

“The state government will take steps for strengthening Moran Autonomous Council. Government asked the community representatives to prepare an annual action plan to be executed by the Moran Autonomous Council for the overall development of the community. The government will also allocate necessary funds for implementation of the action plan.” said CM Sarma.

Issues related to education, agriculture, employment, preservation of historical sites of the community were also discussed in the meeting.

Issues related to ST status for the community increased allocation of funds for the development of the community, expeditious progress of Birangana Sati Sadhani University, preservation of historical sites of the community, etc. were discussed. The representatives also submitted memorandums to the Chief Minister in the meeting.

During the meeting, CM Sarma informed the representatives about the progress of government steps including reservation of seats in educational institutions, allocation of funds for development activities, steps for the settlement of land issues, and other steps to meet various demands of the community.

Moreover, CM Sarma stressed an action plan to be executed by the Chutia Development Council and a roadmap for a time-bound solution of all the issues.

Further, CM Sarma asserted that the government will take positive and proactive steps to meet all the genuine demands of the community.