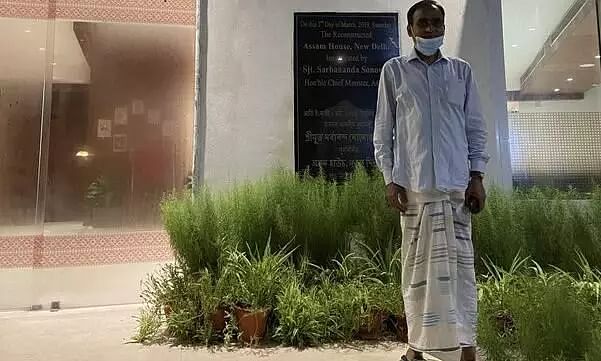 New Delhi: The ‘Miya Community’ has lately evolved as one of the most prominent and robust communities among in the Assamese mainstream. MLA Sherman Ali has created a storm on social media platforms today, after appearing in a traditional ‘Miya attire’ – Complete with a lungi and topi.

The MLA has uploaded a lungi-clad picture of him on his Facebook handle, stating the lungi as traditional attire. In the photo’s caption, he drafts that the photo was taken in the Assam Bhawan, Delhi premises. He has tried to showcase his traditional aspects through digital platforms.

However, numerous friends and supporters of the MLA trolled and asked him to consider the situation of the ongoing flood-ravaged people of the state.

Before the Assam Assembly elections, Assam Chief Minister Himanta Biswa Sarma lashed out upon Congress MLA Sherman Ali Ahmed to ask that a blue lungi be presented at the ‘Miya Museum’, which he has asked be set up at the boundaries of Srimanta Sankardeva Kalakshetra in Guwahati. He also stated he would be sent to prison if BJP returned to power in the next state elections.

After the Congress and AUIDF groups split, Ali states that he feels certain about AUIDF winning two seats in the upcoming by-elections. The two candidates choose by the party are sure to win the elections, said MLA Sherman Ali.

As per reports, MLA Sherman Ali has arrived in New Delhi today, along with other members of AIUDF. They arrived in Delhi for participating in a workshop organized specially for the legislators. The workshop will continue for two days.