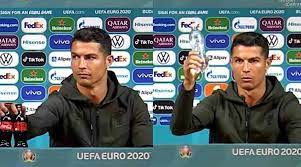 Star footballer Cristiano Ronaldo picks up two glass bottles of Coca-Cola, mutters the company’s name, and sets them aside before holding up a bottle of water. Not long after, the Euro 2020 sponsor saw its market value drop by $4 billion.

The captain of the Portugal football team is a well-known fitness enthusiast. At a press conference in Budapest before Portugal went up against Hungary at Euro 2020, Ronaldo made it well known what he feels about carbonated drinks.

Within seconds of sitting down, the footballer puts the Coca-Cola bottles away and holds a bottle of water up saying, “Agua” (water) in Portuguese in a gesture appeared to encourage people to drink water instead of aerated drinks. The video of the whole episode was shared widely on social media.

Coca-Cola is one of the official sponsors of Euro 2020 because of which the bottles were placed for marketing on the table.

Share
Facebook
Twitter
WhatsApp
Previous articleMan Owns the World’s Most Dangerous Pet One Can Ever Imagine
Next articleKids Live with Father’s Hanging Dead Body for 3 days, Step out in Search of Food