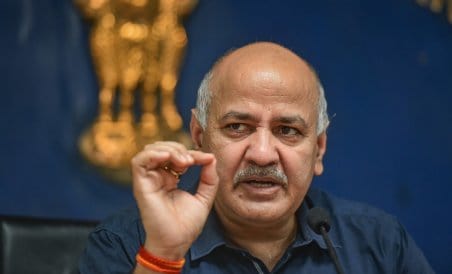 New Delhi: Deputy Chief Minister Manish Sisodia announced that the Delhi government would observe Teachers” Day today as ”Abhar Diwas”. It will confer 122 teachers who diligently performed their responsibilities throughout the COVID-19 pandemic.

A music teacher who lately produced a world record for performing the sitar non-stop for the past 32 hours and a maths teacher who assisted learners of Delhi government institutions to crack the IIT exam will be awarded the ”Face of DoE” (Directorate of Education) honour.

“Teachers of Delhi have performed an essential role in the difficult times of the Covid pandemic. They have not solely worked arm to arm with the administration but have further done exceptional work on the vaccination front, at quarantine stations, in the distribution of food, mask implementation and airport service,” stated Sisodia, who additionally endures the teaching responsibility.

While executing these responsibilities, the teachers further extended to teaching children online and did not let their learning stop. Sisodia said there was large-scale migration throughout the pandemic, and several students went to different lands.

Earlier, the number of awards was 103. However, it has been increased this year, Sisodia stated.

The qualification standards for the Delhi State Teacher’s Award 2021 have been loosened to include guest instructors and private instructors. The criterion for a teacher to have 15 years of schooling experience to be viewed for the grant has been decreased to three years, he stated.

Of the 1,108 applications received for the honour, 122 were settled by a committee, he continued.

The shortlisted educators will be granted at a celebration to be held on Teachers” Day on Sunday.

According to an official report, the mentors who will be awarded the ”Face of DoE” are Raj Kumar and Suman Arora.

Additionally, two special grants will be provided to Bharti Kalra and Rani Bhardwaj, who presented tablet devices to learners and assisted them in different ways throughout the pandemic to proceed with their education; Sisodia stated.

The report stated that five teacher-educators from SCERT/DIET would be honoured as ”Teachers of Teachers”.

The deputy chief minister urged people to call up at least one of their instructors on Teachers” Day and express their gratitude.

He stated the Delhi government is pleased with its mentors, including the “revolutionary reforms” in Delhi”s school training, which is presently being identified globally, have come solely because of them.