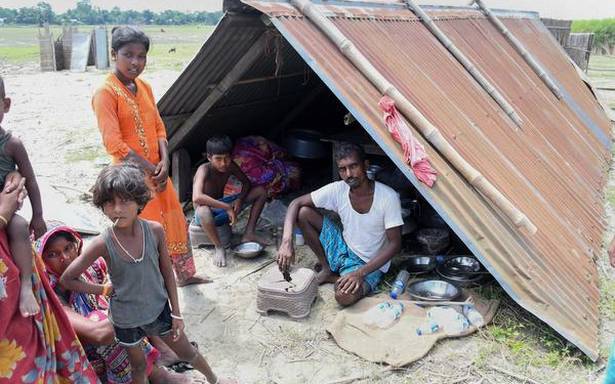 Lakhimpur: The Lakhimpur district administration directed an eviction drive on October 5, 2021. The drive was carried out to remove the unauthorized encroachers upon the bank of the Gariajan, which is flowing through North Lakhimpur town.

In association with district administration, the North Lakhimpur Municipal Board (NLMB) conducted the drive at a four hundred meter range on the east bank of the water body.

The Gariajan has played a significant part in discharging the water from North Lakhimpur town. With about fifty meters wide basin, the reservoir body has reached almost a four-kilometer-long area of the town in its passage.

However, concerning its width, the range of the water body is narrowing slowly due to the aggression of a part of local people, business establishments, and suspicious individuals.

Consequently, the water body has dropped its water discharging volume making artificial floods in a wide area of the town. Under such conditions, various organizations have asked the district administration to remove the unlawful encroachers.

Presently, the water body has become much polluted due to the dumping of plastic wastages and extra trash by some local communities and commercial establishments.

The drive was carried out in the presence of Circle Officer (CO) of North Lakhimpur Revenue Circle— Minakshi Permey. In addition, assistant Commissioner-cum-Chief Executive Officer of the NLMB—Casio Karan Pegu, and Officer-in-Charge of North Lakhimpur Police Station were also present.

The CO Minakshi stated that the district administration would dismiss the unauthorized encroachers upon the bank of the water body one by one in the forthcoming days.

She further notified that notice had been provided to the illegal occupants on the bank of the water body to vacate their residence areas within seven to ten days.