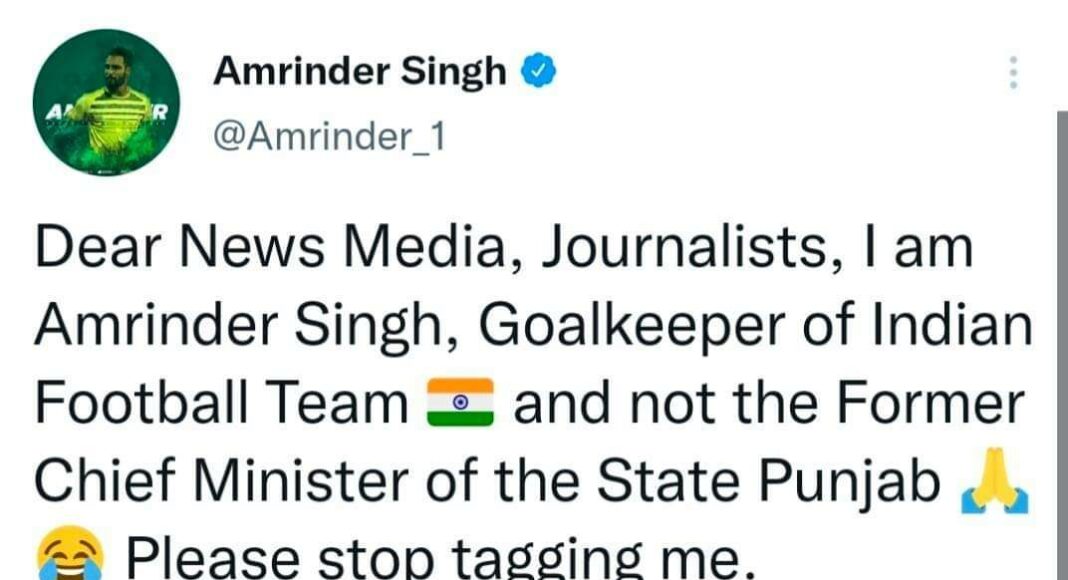 The political developments taking place in Punjab, has left the country bemused over the crisis lingering over the Congress party. Amid this, a sportsperson from the National football team has been left disgruntled for reasons that have made it to the national headlines.

Well, on September 30, Amrinder Singh, the goalkeeper for the Indian National Football team, urged media persons to stop tagging him on social media platforms as most of them tagged the wrong person.

Many of the news outlets, instead of tagging the former Punjab CM, was tagging the sportsperson instead, in what can be called as a major goof up due to the similarity in the names of the two.

Journalists and others are airing their views and speculations on what the former Punjab CM is poised to do next after the state Congress chief and bitter rival Navjot Singh Sidhu unexpectedly resigned.

In a tweet, the football player said, “Dear News Media, Journalists, I am Amrinder Singh, Goalkeeper of Indian Football Team and not the Former Chief Minister of the State Punjab. Please stop tagging me.”

Also Read: Viral transformation! Guess who is this famous celebrity

It seems that the current political drama in Punjab has found a victim who is not even remotely associated with politics but plays football for the country.

Captain Amarinder Singh, the former CM of Punjab, took to Twitter to respond to the sportsperson, “I empathize with you, my young friend. Good luck for your games ahead.”

’75 years of Independence and yet casteism continues’: Supreme Court

Tragic Death: IIT student slips into the river while taking a selfie