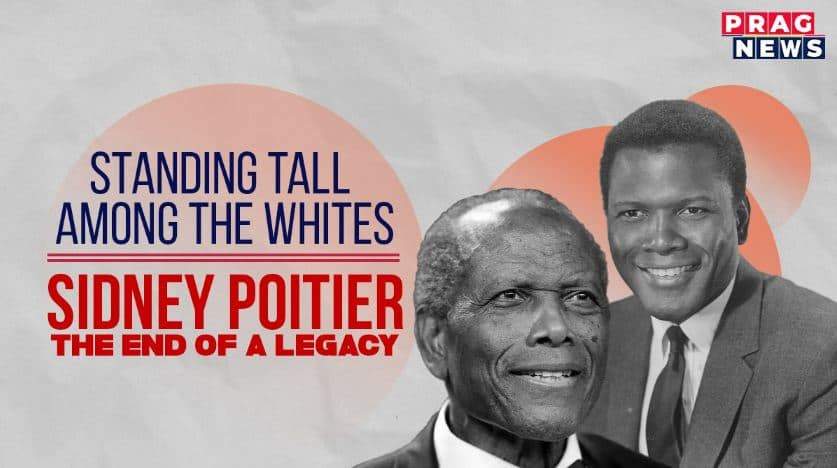 Digital Desk : Sidney Poitier, the first Black man to win the Best Actor at the Academy Awards, passed away at the age of 94 earlier today. The trailblazing actor, who enraptured the hearts of millions at an era when apartheid, civil rights movement was at its peak, got his first break in Hollywood when there were very few roles for Black actors.

It was in the mid-Fifties, when he shattered the glasses with his defiant and prolific acting into the realm of the dominant White community, being ugly-Black was passé for him. He stood tall among the Whites with his roles in 1955’s “Blackboard Jungle”, 1958’s “The Defiant Ones (for which Sidney Poitier became the first Black actor to be nominated for a Best Actor Oscar), and the 1959 adaptation of “Porgy and Bess”.

The actor won the Best Actor Oscar and the first Black actor for his turn in 1963’s “Lilies of the Field”, in which he played a handyman helping a group of nuns build a chapel.

Also read : Remembering Irrfan Khan: On the occasion of his birthday, let’s revisit some of his best performances

Apart from acting, Sidney Poitier was an activist who actively participated in the civil rights movement, appearing alongside protesters. Yes, its true, acting was also part of his activism. Through his poignant yet strong characters, he advocated Black rights and responsibly spoke about the prevailing conditions and prejudices faced by the Black community in front of the camera.

Poitier directed numerous films, authored books in his lifetime. His activism helped him stand out as a tall figure during the civil rights movement.

To be vocal about their rights and that too being a Black man in the White dominated film industry, Sidney Poitier opened the gates for his fellow citizens who would only dream of but stay away due to fear of being rebuked and shunned from the society.

Sidney Poitier’s later stage post taking exile from movies, dedicated his life for activism and diplomacy; spreading word of equality and human rights for the Black community. The actor maintained his Bahamas citizenship, served as the West Indies island’s ambassador to Japan from 1997 to 2007.

He was awarded a Knight Commander of the Order of the British Empire by Queen Elizabeth in 1974 and received nearly every award possible for his work in cinema: the Kennedy Center Honor in 1995 and Lifetime achievement awards from both the BAFTAs and Academy Awards: Poitier received the latter in 2002, on the same night that Denzel Washington became the second Black actor to win Best Actor (for “Training Day”) and Halle Berry became the first Black woman to win Best Actress (Monster’s Ball).

For his activism and service to the humanity, especially for the Black community, Sidney Poitier was conferred the America’s highest civilian award, the Presidential Medal of Freedom by President Barack Obama. “It’s been said that Sidney Poitier does not make movies; he makes milestones,” Obama said. “Milestones of artistic excellence, milestones of America’s progress. Onscreen and behind the camera… Poitier not only entertained but enlightened, shifting attitudes, broadening hearts, revealing the power of the silver screen to bring us closer together.”