In October 2021, Shiloh Jolie-Pitt garnered attention when she, her mother Angelina Jolie, and her siblings attended the Eternals movie premiere.

Digital Desk: Shiloh Jolie-Pitt, daughter of Angelina Jolie, is gradually establishing herself on social media. She is currently grabbing attention with her dance moves. The 16-year-old's recent video, in which she can be seen dancing to "Vegas" by Doja Cat from the soundtrack of the upcoming biopic Elvis, has gone viral online.

The video was posted by Shiloh on her YouTube channel. The adolescents have long been linked to the Millennium Dance Complex in Los Angeles. She has also appeared in a number of videos from the same studio that worked with Janet Jackson, Jennifer Lopez, Justin Timberlake, Britney Spears, and others. It is also well-known for collaborating with choreographers like James Combo Marino, Tobias Ellehammer, and Hamilton Evans.

When Shiloh Jolie-Pitt, her mother Angelina Jolie, and her siblings attended the Eternals movie premiere in October 2021, they made headlines. At the Marvel movie premiere in Los Angeles, she and her sister Zahara made a statement by donning Angelina's dresses again; Shiloh repeated the feat at the London premiere by donning an updated version of a black and white Dior dress that her mother wore in 2019. 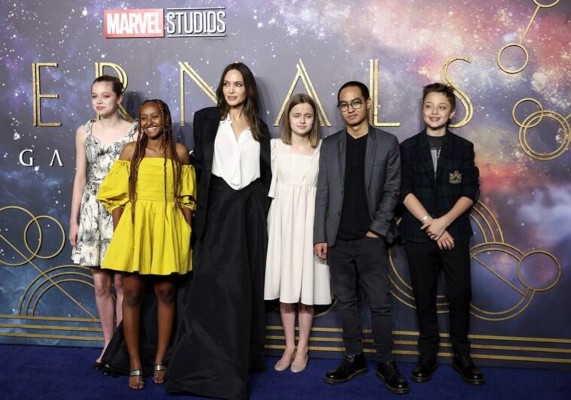 Here's a picture of Shiloh Pitt, the daughter of Brad Pitt and Angelia Jolie, who drew attention because of her uncanny resemblance to her mother.

Also Read: Brad Pitt to take retirement from his acting career: "I feel myself to be on my last leg"