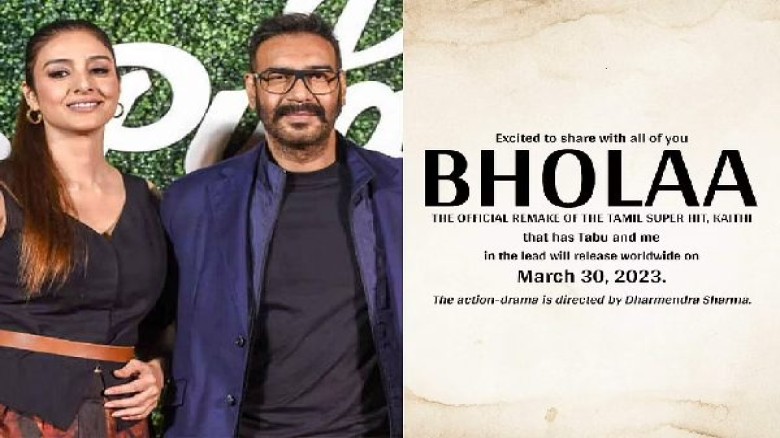 Bholaa, a film starring Ajay Devgn and Tabu, will hit the theatres on March 30, 2023. The actors began filming the movie.
Digital Desk: Bholaa, Ajay Devgn's upcoming film, will be released on April 19, according to the actor. The film is a remake of the Tamil classic Kaithi, directed by Dharmendra Sharma.
Bholaa, which also stars Tabu, hit the screens in February of this year. It will be released in theatres on March 30, 2020. As a super-cop, Tabu will star in the film produced by Ajay Devgn films, Tseries Films, Reliance Entertainment, and Dream Warrior Pictures.
On social media, Ajay Devgn, who will soon be featured in Runway 24, announced the release date of his next film, Bholaa.
Ajay tweeted and Captioned, "Proudly announcing my next venture Bholaa, releasing on March 30, 2023."
Ajay Devgn confirmed in 2020 that he would be directing the Hindi version of the Tamil action movie Kaithi. The actor is both the producer and the lead actor in the picture. Dharmendra Sharma, Devgn's cousin, will direct Bholaa. The film follows an ex-convict on his quest to reunite with his daughter after being released from prison. He is, however, interrupted by a drug raid.
Also Read: Bollywood's Mr Perfectionist performs Bhangra on Dhol Jageero Da with influencer Ruhee Dosani