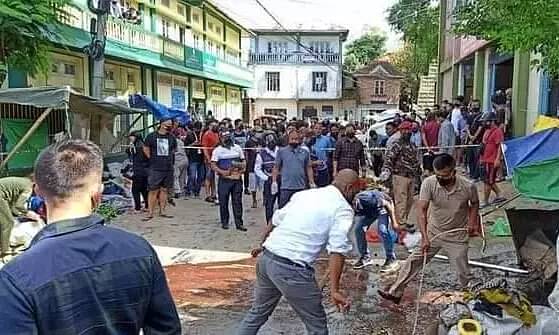 Imphal: A woman was killed by her ex-husband in an open market in the Lunglei district of Mizoram. The ex-husband named Pu Rohmingliana used a suicide bomb that killed himself and his wife.

The woman identified as Pi Lalthianghlimi, who was 61 years of age, hailed from Lunglei District. The incident of the killing took place near Hmar People’s Convention (HPC) Office on Tuesday.

The entire incident was witnessed by the couple’s daughter who runs a small stall right next to her mother’s. The ex-husband Rohmingliana visited the wife to sell vegetables in the market, claimed the victim’s daughter.

The daughter further acquainted that the couple had been divorced for more than a month. The ex-husband was immediately admitted to the Civil Hospital, but he died to his wounds.

Rohmingliana allegedly pretended to feel ill and leaned on his ex-wife when the bomb abruptly went off, killing Lalthianghlimi on the spot.

An investigation is on, and further details are awaited.