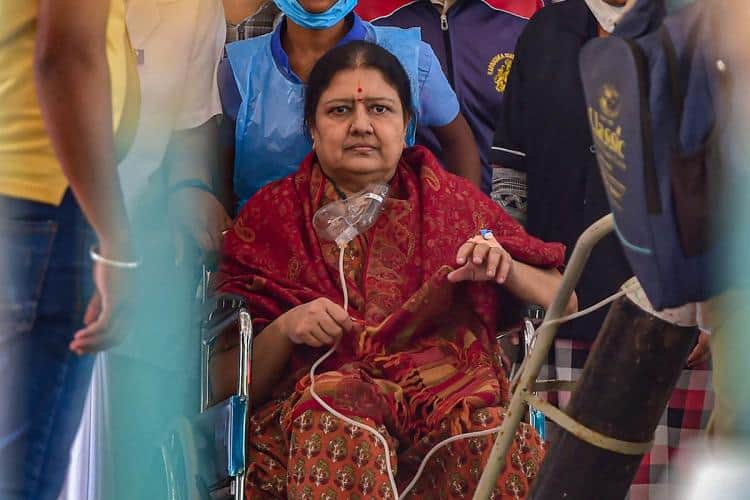 Sasikala’s procedures for her release were completed at Victoria Hospital, Bengaluru where the 64-year-old is undergoing treatment for Covid-19 infection. She has been lodged in the Central Jail in Parappana Agrahara for four years since February 2017 in connection with the Rs 66 crore disproportionate assets case.

A huge number of supporters had lined up outside the hospital raising slogans in favour of Sasikala who were seen distributing sweets after the release announcement.

The release comes months ahead of Tamil Nadu assembly elections and on a day when chief minister K Palaniswami inaugurated a Rs 79 crore memorial along Chennai’s Marina beach in the name of Jayalalithaa.

Post her release, her supporters will be waiting for her to come back which will be the most vital change to be seen in the poll-bound state of Tamil Nadu. A lot has changed in AIADMK while Sasikala was serving the jail term. Rebel leader O Pannerselvam whom she had ousted from the CM post is back in the party. The CM she had handpicked, K Palaniswami has joined hands with the Paneerselvam.

Doubts are being raised whether she will ever return to active politics after being released from the prison. CM Palaniswami said recently that she won’t be back in the party, while others said AIADMLA will ally with AMMK, the party founded by Sasikala’s nephew TTV Dhinakaran.

It is only time that will decided whether Sasikala will return to politics after loyally serving AIADMK for three decades before being tainted in a corruption case.

Share
Facebook
Twitter
WhatsApp
Previous articleMore than half of legislators in Assam crorepatis, AGP MLA Naren Sonowal from Naharkatia the richest
Next article“No one will be spared” says Delhi Police a day after the violent tractor rally