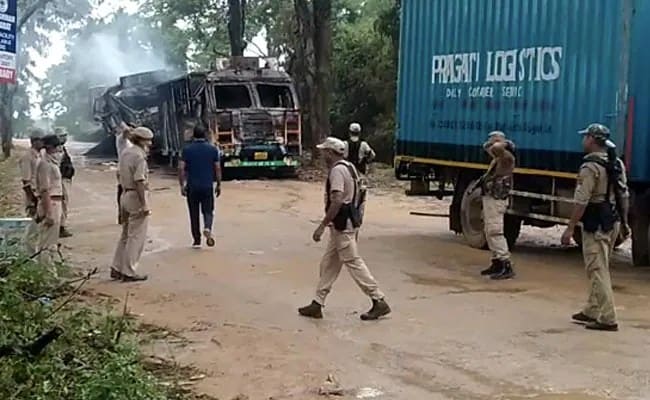 Guwahati: A frightful situation on August 26 in Assam’s Dima Hasao district under a suspected militant attack killed five and injured one. As per reports, the suspected DNLA militants fired at trucks before setting them on the blaze.

At around 8.30 pm, a group of loaded men had stopped seven trucks. Following this, they started firing aimlessly.

According to police reports, six trucks carried cement and one truck loaded with coal for transportation purposes.

“The group of armed men fired at the trucks for few minutes and then set them afire. As a result, five persons have died in this disturbance incident, and one sustained injury. All of them are drivers and handymen of the vehicles,” Jayant Singh, Superintendent of Police, Dima Hasao stated.

The police authorities speculate that the Dimasa National Liberation Army (DNLA) was involved in the attack.

DNLA necessitates a “sovereign land” for the Dimasas, one of the tribes in Assam, residing principally in central and South Assam.

Police authorities have stated that the investigation is under process. The police are investigating whether the DNLA militant group charged money from the cement company before the attack.

Earlier, security troops executed seven members of DNLA and stepped up operations against the group. The militant group was suspected of carrying out extortion and abduction in Dima Hasao. The major militant groups were either deserted or are in talks with the government.

However, this DNLA militant group has become a major issue for the security forces and the state government.