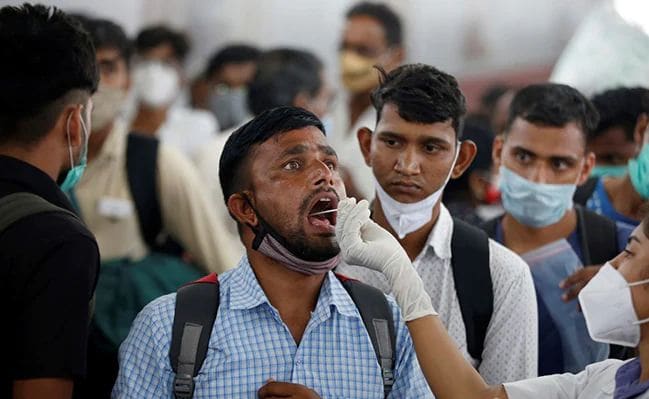 Digital Desk : India is witnessing a rapid surge in its daily Covid caseload, triggered by the new Omicron variant. India’s Covid cases have crossed the grim landmark of 1 lakh on Thursday, just eight days after going past the 10,000 mark.

India last recorded 1 lakh new infections on a single day on June 6, 2021, when the second wave of the Covid pandemic was dwindling.

Also read : Do not give paracetamol or pain killers to teens after Covaxin shot: Vaccine Maker

A similar rise in daily Covid cases was witnessed in the first wave in India (when cases peaked at 98,795) and 47 days during the second wave.

The current rate of growth seems to be five times faster than it was at the beginning of the pandemic second wave, which spiraled up at over 4 lakh daily cases.

Since the surge began, some 10 days ago, India’s Covid cases have risen at an alarming rate of 35 percent so far. Thursday’s growth rate has been recorded to be nearly 29 percent higher than Wednesday’s count.

The previous two days had seen cases rise by 56 percent and 56.6 percent respectively, following a rise in testing after the weekend.

On the brighter side, death figures have risen only marginally in the last few days. On Thursday, 97 deaths were reported, staying below the 100 mark for the second straight day after having risen to 112 on Tuesday.

There has been a slight uptick in fatalities, in the last three, starting from Delhi where cases were first reported, at a graded manner, since the beginning of December.

India’s Covid cases zoomed past 3.5 lakh on Thursday, an uptick of nearly 86,000 cases in a day amid the rush of new infections.

A similar trend is being witnessed in other states as well, forcing state functionaries to impose curbs and restrictions to contain the rising Covid tally.