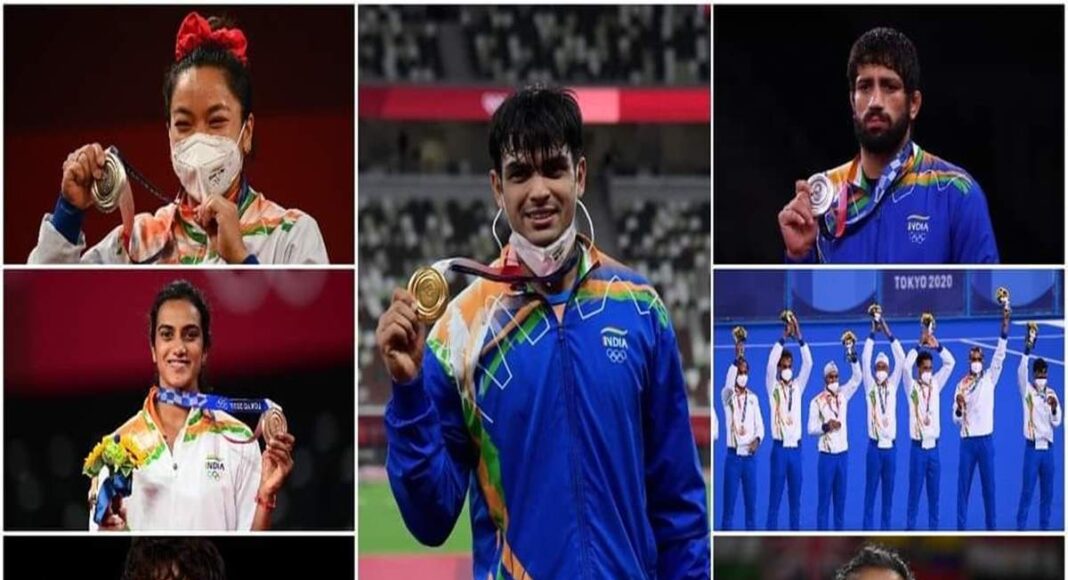 Tokyo: The sensational period of the Tokyo Olympics 2020 comes to an end today. Starting from Friday, July 23 2021, till Sunday, August 8, the nations were in its spirit of collecting medals and honour. So, let’s have a closer view of the Indian Athletes winning titles for the nation.

Its a gold for India, finally with Indian athlete Neeraj Chopra. With a great throw of 87.58 metres at the Tokyo Olympics 2020, Neeraj Chopra became the first Indian to gain a Gold medal in the Javelin throw.

Neeraj has brought an end to the country’s 121-year drought for an athletics medal. A 23-year-old soldier from Panipat, Haryana, belongs to a farming family in the small village of Khandar. He practised javelin throw to drop weight as he was overweight. But, soon became fascinated with the game, and the rest, he had earned an Olympic gold for the nation.

It was a day to remember when Mirabai Chanu brought the first medal for India at Tokyogames2020. The 26-year-old athlete belongs to a small village, 200 kilometres away from the state capital of Imphal. She fell in love with the sport of weightlifting, and she first began training in 2007. She creates a story of a masterpiece, building up from having nothing to everything.

Ravi Kumar Dahiya succeeded in bringing the next silver for India in Tokyo2020. The 23-year-old wrestler is from Nahri village in Sonipat, Haryana. He owns tremendous power, strength and is technical superiority in his matches. Dahiya moreover has two Asian Championship gold rewards under his belt.

Indian Shuttler P.V. Sindhu printed her mark into the history of Indian sports with a bronze at the Tokyo Olympics. She belongs to the land of Hyderabad and belongs to a family of sports. The 26-year-old athlete kept her name upon the hopes she has made among her audiences her bronze.

Indian boxer Lovlina Borgohain brings bronze back home with her exceptional performances. The 23-year-old from Assam began her vocation as a Muay Thai practitioner. She became the third Indian boxer to secure a podium end at the showpiece. To hold her fit for the Olympics, she practised with an empty LPG cylinder before the Sports Authority of India gave her practice materials. Her story is not just an inspirational tale, but she has taught many about refining ways for sucess.

Indian wrestler Bajrang Punia dropped out on gold and silver, yet he has assured wearing a bronze at Tokyo2020. The 27-year-old fighter is the single Indian wrestler to have won three World Champions. Bajrang hailed from Jhajjar in Haryana and started wrestling at the age of seven. And rest is all that he has accomplished.

Breaking the 41years of drought in Hockey for India, the men’s hockey team has brought back hopes. Indian men’s team gave the nation an Olympics bronze this time. Moreover, India secured a magnificent triumph over five-time winners Germany in a competition. India feels proud of having such a team with great spirit and determination.

India women’s hockey team could not make it to the medal at Tokyo2020. But, the team of women had played with strength and stimulus.

India has earned a total of seven medals at the Tokyo Olympics 2020. There are several stories of inspiration for the nation out of these medals. India looks forth with new aspirations and better outcomes for the next game. India has got vulnerable players with talents and determination to win. The nation feels proud of all the players who qualified for TokyoOLympics and had displayed their best moves.