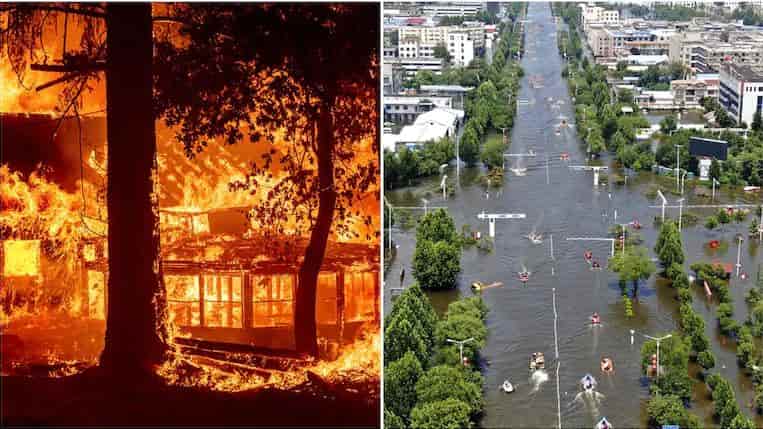 Digital Desk : The world incurred huge economic losses due to widespread natural disasters witnessed in many countries. The year 2021 was no less traumatic for the earthlings. Covid spread along with sweeping natural disasters, proved expensive for many.

Hurricane Ida in Louisiana, flash floods in Europe, volcanic eruptions are few of the most viral news of natural disasters we have read or noticed in the recent times, forcing us to rethink on environment protection preparedness by world environment agencies.

Also read: “Rags to Riches” Once a McDonald staff now a Billionaire

A report released by the reinsurance company Munich Re said on Monday, that the overall economic losses from natural disasters worldwide last year at $280 billion, making it the fourth-costliest after 2011, the year a massive earthquake and tsunami hit Japan.

The company’s annual report calculated $120 billion of losses in 2021, the second highest after 2017, when Hurricanes, Harvey, Irma and Maria hit the Americas.

Hurricane Ida accounted a total loss of $36 billion while flash floods in Europe amounted to $13 billion.

Almost 10,000 died as a result of a natural disaster in 2021, comparable to the death toll in recent years, Munich Re said.

Scientists say that higher temperatures can cause the air to absorb more moisture, which can lead to more extreme rainfall such as that seen in western Germany, Belgium and the Netherlands last summer.

“Even though events cannot automatically be attributed to climate change, analysis of the changes over decades provides plausible indications of a connection with the warming of the atmosphere and the oceans,” said Ernst Rauch, Munich Re’s chief climate scientist, adding that adapting to increasing risks would be “a challenge.”

The whopping economic crisis with a humongous loss of $280 billion can be wholly attributed to climate change, leading to disastrous natural calamities.