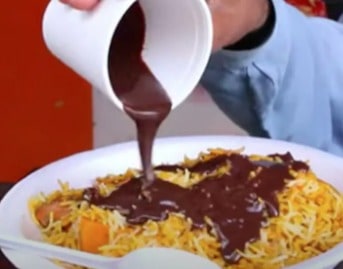 Biryani is a dish that almost every foodie enjoys. But, what about Chocolate Biryani? Well, if that sounds unlikely, here’s the story. A shop in Karachi is actually selling Chocolate Biryani and the uncanny dish went viral on social media after a Pakistani YouTube channel called FHM Pakistan posted a video of the preparation.

The video features the host of the show who visited the shop in Karachi that is selling Chocolate Biryani and ordered a plate of the dish. Before serving the dish to him, loads of chocolate sauce was poured over a plate of biryani.

The host mixed the rice with the chocolate sauce and was delighted after tasting the first mouthful. “This is just so good. Kya baat hai, waah! Kuch bhi nahi khaya apne agar ye (chocolate biriyani) nahi khayi toh! I want to kiss the chef’s hands for making this,” he said.

This particular video has gone viral on social media with over 22,000 views and social media users were quite unconvinced with the show’s host for his review of Chocolate Biryani. Several users said that the host should get an “award for his acting skills”. Quite understandably, biryani lovers were disgusted after watching this odd combination of the dish mixed with chocolate sauce.