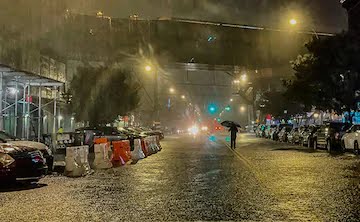 Heavy rain accompanied by a strong gust of wind caused by hurricane Ida, left New Yorkers shuttling through flooded subways, and roads as water continued to rise up.

Hurricane Ida sent the New York City area into a state of emergency early Thursday, as the storm carried into New England with threats of more tornadoes.

A state of emergency was declared in New York after flash floods inundated roads of the city, triggered by the heavy rains from the remnants of Storm Ida. “I am declaring a state of emergency to help New Yorkers affected by tonight’s storm,” New York Governor Kathy Hochul tweeted, after Ida, which slammed into the southern United States as a Category 4 hurricane on Sunday, caused tornadoes and flooding as it steamed north.

At least one person was killed as the flooding inundated the New Jersey city of Passaic, Mayor Hector Lora told CNN.

“Act like you are crying”: YouTuber faces backlash after she forces her son to cry on camera