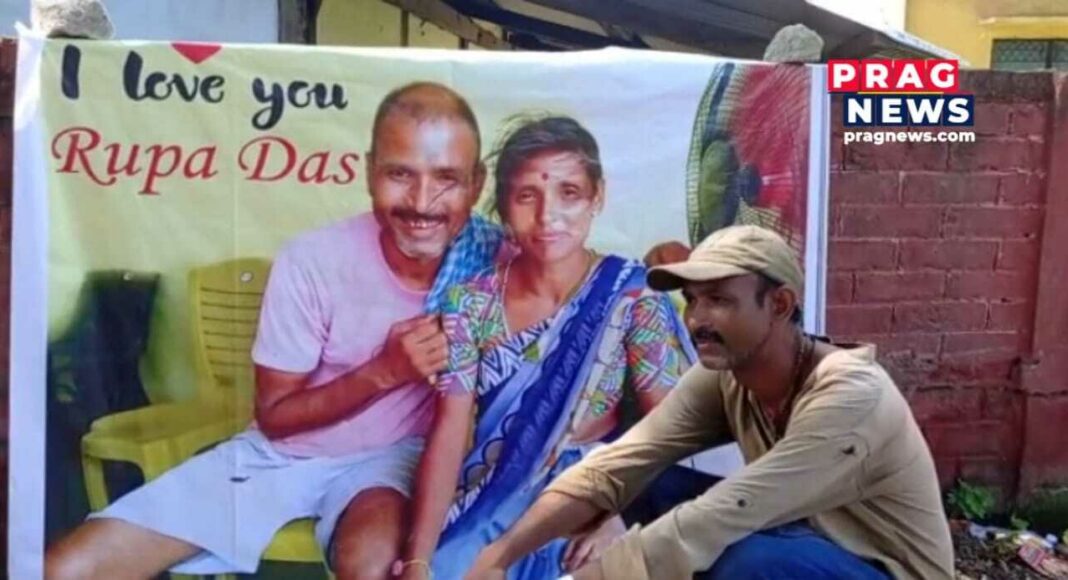 Golaghat: He is not a lover who doesn’t love forever. To love is to burn, to be on fire. Love does not begin and end the way we seem to think it does. Love is a battle. Yes, love is a heavenly feeling, but when a loved one leaves, that pain becomes miserable for a lover. One such dramatic scene was witnessed in Dergaon today.

Prashant Das, hailing from South Daljali in Dergaon, married Rupa Das of Panigaon Khabakati in Lakhimpur. The two were doing well for many years.

But suddenly the happiness of the two dilapidated. Rupa left Prashant and her son and moved to her mother’s house.

Prashant tried many times to bring back his dear wife. But his efforts were in vain. Rupa never returned to her husband’s house and continues still to be adamant on her stance. Since then, Prashant Das has been walking around the streets making banners and posters with pictures of himself as well as his wife and son. Prashant said he has so far spent more than 40,000 rupees on banners and posters. He sold his land to meet the expenses. Suddenly in the middle of the road, Prashant was seen screaming in the name of his wife Rupa, with a poster in his hand. This state of affairs due to the love of this man who walks around with a banner poster in his hand with his wife’s name makes many netizens eyes moist and many found a situation to laugh upon.

Whatever be the situation, we hope Rupa returns as her ‘Devdas’ turning husband shall continue to roam about the streets, carrying the banners, expressing his supreme love for his estranged wife.

Share
Facebook
Twitter
WhatsApp
Previous articleThere was nothing to pull; Ranjeet says women’s short clothes ended his career
Next articleCentre likely to hike DA for its employees again! Check for details below