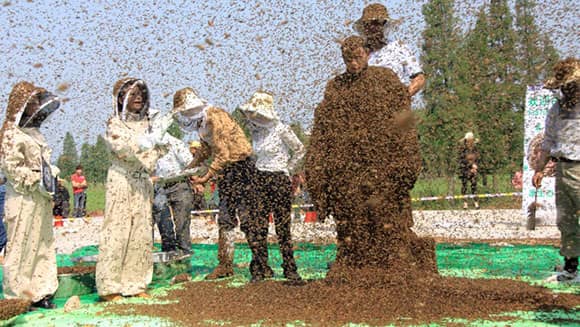 Digital Desk: A video of a man covering himself with bees has created a buzz on the internet once again after 6 years of being shared online. Reportedly, Guinness World Records (GWR) shared on its official Facebook page a video featuring a man named Ruan Liangming from China who covered his entire body with around 6 lakh bees to set the record. "Heaviest Mantle of Bees"- Guinness World Records. Getting a real buzz out of record-breaking: China's Ruan Liangming loves bees." they wrote while posting the video. According to a GWR blog, the jaw-dropping record was set while competing in Italy's Lo Show Dei Record in 2016. The nerve-wracking endeavor depicts him attempting to create the ideal "bee beard," a carnival act that dates back to the nineteenth century. He coated himself with nearly 637,000 individual bees to set the record. Soon after the video was uploaded on the social media platform, it gathered over 29 million views, and the numbers are still rising. People have also left a variety of comments in response to the share.