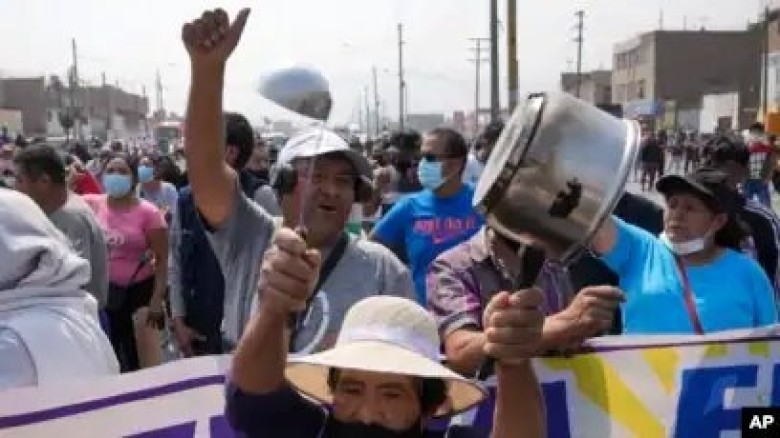 Castillo said that the curfew was implemented to "restore peace" following nationwide protests and food inflation.

Digital Desk: Following crisis talks with Congress of the Republic of Peru, Peruvian President Pedro Castillo declared the removal of a curfew in Lima to contain protests against rising oil prices.

"We will remove this immobility quickly (curfew). We urge the Peruvian people to remain calm," said the leftist leader along with Congress of the Republic of Peru, President Maria del Carmen Alva.

Reportedly, police and soldiers guarded the largely deserted roads of Lima earlier Tuesday, after Castillo declared a curfew for Lima and the neighbouring port city of Callao shortly before midnight on Monday.

It was scheduled to last until Tuesday midnight as authorities attempted to quell protests against rising fuel and toll prices in the wake of increasing economic distress.

Hundreds of protesters applauded as the curfew was removed in Lima, AFP journalists reported. Meanwhile, on Twitter, opposition legislator Alva remarked, "The people did it!"

Reportedly, shops and schools were closed, and bus services were mostly suspended. Still, many employees, such as those working at hotels and hospitals, chose to ignore the curfew, which was widely condemned on social media.

A hotel employee said to AFP that she had to pay $8 for a taxi to operate, which was a huge sum of money from her salary. Moreover,  Several tourists faced difficulties finding food as restaurants and supermarkets were closed, but domestic and international flights from Jorge Chavez airport continued as usual, according to the airport's concessioner.

Reacting to the first social protests of his eighth-month presidency, Castillo said, "The measures are taken, like those taken yesterday, are not against the people, but to save the lives of fellow countrymen."

He added that the curfew was implemented to "restore peace" following nationwide protests and food inflation.

"We got information from a reliable source that there would be vandalism today. That is why we took this step," Defense Minister Jose Gavidia said on Tuesday. Notably, while Lima was under curfew, protest movements and roadblocks persisted in several other Peruvian cities.

Like much of the rest of the world, Peru's economy is reeling from the effects of the coronavirus pandemic. As per the national statistics institute, the country's Consumer Price Index increased by the most in 26 years in March, owing to soaring food, transportation, and education costs.

Reportedly, to appease protesters, the government abolished the fuel tax over the weekend and mandated a 10% increase in the minimum wage beginning May 1. However, the country's main trade union federation, the General Confederation of Workers of Peru (CGTP), deemed the measures inadequate and took to the streets again on Monday in Lima and several regions in Peru's north.

Several demonstrators set fire to highway toll booths, looted stores, and clashed with police. While others set fire to tyres and blocked the Pan-American Highway, the country's main corridor for people and goods. On Monday, the outages stopped public transportation and forced the shutdown of schools.

"Protest is a constitutional right, but it should be done within the law," a 52-year-old former rural school teacher pleaded on television late Monday.

According to an Ipsos poll in March, two-thirds of Peruvians oppose Castillo's rule. Castillo's curfew announcement came a week after he narrowly avoided impeachment by Congress, where opponents accused his government of "lack of direction" and allowing corruption in his posse.

It also marked the 30th anniversary of a revolution staged by ex-President Alberto Fujimori, who was imprisoned for his regime's bloody campaign against insurgents. "The measure imposed by President Pedro Castillo is publicly unlawful, inappropriate, and infringes people's right to individual freedom," lawyer Carlos Rivera, who represents Fujimori's victims, tweeted.

Political analyst Luis Benavente said, "The curfew was an autocratic measure that revealed incompetence, incapacity to govern. As many of Lima's 10 million residents work in the informal sector as street vendors and other traders, the curfew left them without income for the day."

As per reports, the Copa Libertadores football match between Peruvian Club Sporting Cristal and Brazil's Flamengo will go ahead as planned on Tuesday night in Lima, regional governing body CONMEBOL announced on Instagram.