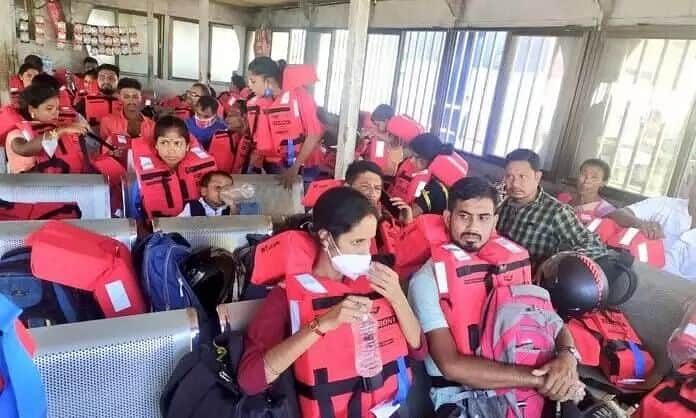 Majuli: Following the tragic Nimati Ghat boat incident, the Assam Government has started government ferry services in Majuli. On Friday, passengers were seen wearing life jackets for the first time while taking the ferry services for crossing the Brahmaputra river.

This initiative by the state government has come after media reported that several life jackets were stored unused in Nimatighat’s passenger restroom.

Furthermore, Passengers will not be allowed to travel onboard without wearing a life jacket for safety purposes.

Passengers were seen boarding a government ship in Majuli wearing a life jacket on Friday. Many of the passengers started appreciating the initiative taken by the government, which was a necessity to state. It is further beneficial if this practice continues later.

On Friday, Union Minister Sarbananda Sonowal reached his constituency, Majuli, and stated that the Chief Minister of Assam, Dr. Himanata Biswa Sarma, has directed an inquiry to find and punish the individuals involved in the incident.

On September 8th, a ferry from Majuli struck with a boat departing from Nimatghat. The boat overturned, ending in the death of a lecturer, Parimita Das.

According to the reports, the ticket counter installation also adds to the initiatives taken by the state government after the boat tragedy.