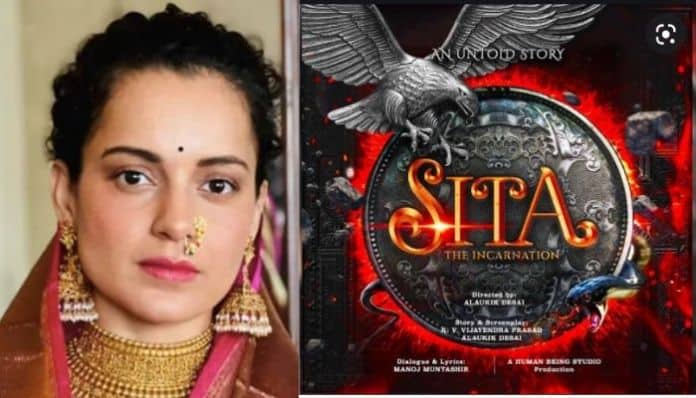 Mumbai: Bollywood actress Kangana Ranaut is all set to play the role of Goddess Sita in one of India’s greatest epics, ‘Ramayana.’ She will be displayed as the protagonist of this epic tale movie.

The moviemakers have officially announced an update regarding the upcoming epic period drama SITA-The Incarnation. Alaukik Desai will direct the film.

The bollywood queen Kangana took to social media to announce the progress, sharing a movie poster and writing, “The Incarnation- Sita Glad to be on board for the title role with this immensely talented team of artists.. With the blessings of Sita Ram … Jai SiyaRam.”

The director Alaukik also tweeted and shared the update as well, writing, “SITA AARAMBH Universe does help those who surrender to it with belief. What was a mirage, is now clarity. A dream of a pious character never explored is now a reality. I am ecstatic to bring #KanganaRanaut on board as SITA. Thank you #SSStudio for your immense support.”

Producer Saloni Sharma from SS Studio further notified regarding Kangana doing a role of the project, appending, “As a woman, I couldn’t be happier in welcoming Ms KanganaRanaut on board our Vfx magnum opus, ‘The Incarnation Sita’. Kangana symbolizes the spirit & essence of the Indian woman – fearless, daunting & daring…. It’s time we stepped in to celebrate equality in every respect.”

The actress will soon be seen in Dhaakad and Tejas as well. The team of Dhaakad lately wrapped the movie’s action-packed agenda in Budapest.

The writer of this upcoming film KV Vijayendra Prasad had revealed earlier that his selection of actress to perform the role of Sita is none other than Kangana.