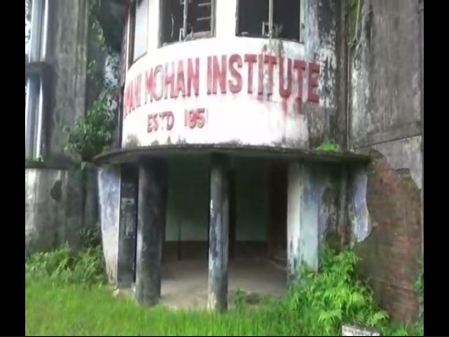 Karimganj: More than 70 years old heritage building is crumbling due to the negligence of the Assam government in Karimganj district.

Reportedly, ‘Ramani Mohan Institute,’ the heritage building situated at Nilamani road, Karimganj, seems like screaming in pain to save its old legacy in front of the concerned authority.

As per the report, this old building has links with many historical moments during the 90’s era; it was the only place in Karimganj district where many imminent artists performed in their shows; heartthrob Zubeen Garg has also performed here many times. Moreover, it was the only place where a drama show, cultural rally, a political rally was organized.

Reportedly, ‘Ramani Mohan Institute’ was equipped with over 1,500 seating capacity facilities along with the modern sound technology system.  Speaking about the deplorable condition of the Ramani Mohan Institute, a local asserted, “Before, this was used to be a great place where we used to enjoy different cultural programs as well as drama shows.”

“It holds an important place in our lives. We are sad that the Assam government has not taken any initiative to revive it.” added the local.

Another local stated, “Instead of declaring it as Heritage building, the government has turned its back due to which it has turned into a ghost bungalow.”

“The local authority is also not paying any interest for the revival of it. We are disheartened for such types of actions from government and concerned authorities side.” the local asserted.

Notably, the Ramani Mohan Institute opened in 1951, with the land donated by the late Ranendra Mohan Das; he named this institute after his father name Ramani Mohan Das.