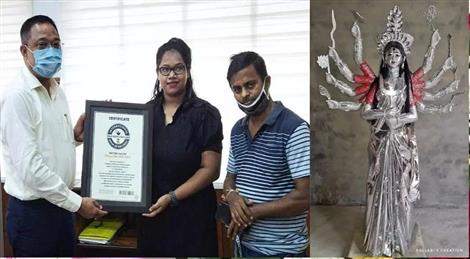 Silchar: The story tells of Pollabi Deb Roy, a Karimganj girl who breaks the world record for creating a Durga idol in her own unique concept and aesthetic design. She used recycled materials to create the world’s largest statue of Goddess Durga. The idol stood 6 feet tall. To create the idol and perform the feat, she used plastic packets, spoons, aluminium sheets, cardboards, and a clay model.

Pollabi created the idol in 2018, and it received a lot of praise on social media. After two years, her work of art was inducted into the International Book of Records.

Pollabi received a call from the International Book of Records, asking her to submit her application. She supplied the essential paperwork and letters of gratitude from various organisations, which the Karimganj Press Club endorsed. After a lengthy inspection and appraisal, she received a positive message about her talent being recognised. Her citation and medal were issued via mail due to the corona pandemic. On Thursday, Deputy Commissioner of Karimganj, Khageshwar Pegu, presented Pollabi Deb Roy with the citation and medal in the presence of Arup Roy, general secretary of Karimganj Press Club, and other members at a small gathering in his office.

While praising Pollabi’s work, the Deputy Commissioner urged that the municipal board’s waste be properly utilised. He urged Pollabi to consider and investigate the prospect of creating jobs.

Arup Roy praised the artist and congratulated her on her talent and for bringing the name of a far-flung Indian border hamlet to the attention of an international audience. “I never dreamed my small effort would gain me international acclaim,” Pollabi remarked. She would seek more success. She thanked her parents and the Karimganj Press Club in particular for encouraging and inspiring her.