Karishma Kapoor says she was refraining to accept ‘Dil Toh Pagal Hai’ because of Madhuri Dixit; ‘All heroines refused it’ 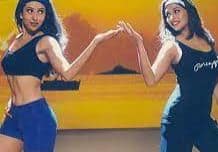 Actor Karisma Kapoor has revealed that she had initially rejected Dil Toh Pagal Hai as it required her to compete with Madhuri Dixit in dance. She also added that her mother, former actor Babita Kapoor, had encouraged her to take up the role.

Karisma Kapoor will appear on the reality show Indian Idol 12 as a special guest this weekend. In the upcoming episode, the top six contestants will sing Karisma’s songs.

On the show, Karisma said about Dil Toh Pagal Hai, “Every single heroine refused the film. The role came to me…it was a dance film and that too to work with opposite Madhuri Dixit they said ‘No how can we dance alongside Madhuri Dixit ji!’

Initially, I too said no to it as it was a dance film and competition dance with Madhuri Dixit. I said, ‘This isn’t happening’. Then finally, Yash ji and Adi (Yash Chopra and Aditya Chopra) narrated the story to me. My mother told me, ‘You must take up the challenge. You are a big fan of Madhuri Dixit, you must do it. You work hard and you will shine.”

Recently, Karisma celebrated 30 years in the Hindi film industry. She hit the milestone on June 21, which was the release date of her debut feature Prem Qaidi. Earlier this month, she took to her Instagram account and shared a video montage of her popular hits from the 1990s.

The video featured a mash-up of Karisma’s popular songs from some of her iconic movies such as Hero No 1, Coolie No 1, Zubeidaa, Dulhan Hum Le Jayenge, Hum Saath-Saath Hain, Raja Babu and Andaz Apna Apna, among others. In the caption, she wrote, “Replaying the memories with a dose of the 90’s #thirtyyearsofgratitude #90sjam.”

Karisma was last seen on screen in her debut web series Mentalhood, which released last year.