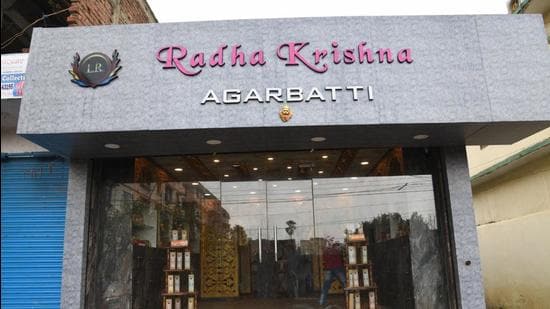 Tej Pratap Yadav, the elder son of Lalu Prasad, has set up a shop selling items used in pooja (worshipping) rituals like incense sticks, sandalwood, perfume, and Radhe-Krishna idols, which he has named LR Radhe Krishna. “The initials LR stand for Largest Reach, but it is commonly associated with Lalu-Rabri,” said Abhishek Chowbey, manager of the LR Radhe Krishna office-cum-shop spread, around 400 square feet in area, adjacent to the famous cowshed owned by Lalu Prasad in Danapur.

Tej Pratap is known to be a staunch follower of Lord Krishna and prefers to spend time at Mathura. “Although he rarely visits the shop, he keeps a tab on the business,” said Chowbey, who has been associated with the Hasanpur MLA for the last three years. “The business started in March, but had to be shuttered due to lockdown,” he said. Asked if the product launch was kept in abeyance for the release of Lalu Prasad, Chowbey said, “Sir (Lalu) is a big name,” he said, adding that there has been a good response for the products. “There have been trading queries from Mumbai and Indore and it is being supplied to all parts of Bihar. At present, we are producing 19 flavors of incense sticks in the price range of ₹320 to ₹1020 for 200 gm pack and ₹170 to ₹530 for 100 gm pack. There is also a combo gift pack costing ₹2,000,” he said. “The incense sticks are made from flowers collected from temples and extracts from coconut leaves instead of bamboo. Maybe that’s why its price is high,” he says.

“Lalu’s name still sells in rural Bihar. So what Tej Pratap is doing is not surprising. You cannot deny the acceptability of his name among the rural folks,” says Sambhu Singh, a retired government official.

The BJP, meanwhile, was quick to take a dig. “Best wishes to Tej Pratap for his new business venture. The way he has been sidelined in the party, it’s good that he is looking for an alternative. Tejashwi can feel relieved because he is the worst victim of his brother’s tantrums,” said BJP spokesperson Nikhil Anand.