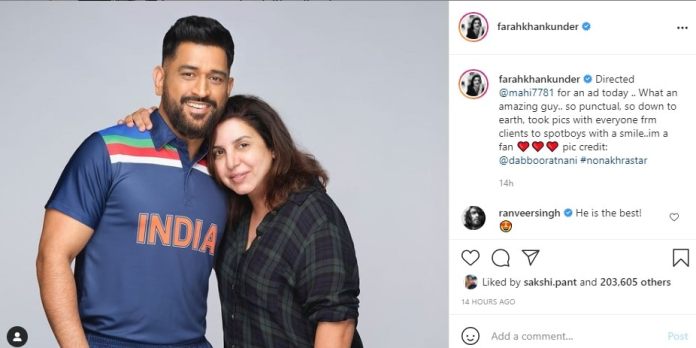 Mumbai: Former Indian skipper and remarkable cricketer MS Dhoni wears a retro jersey during a commercial advertisement shoot, overtaking the love and appreciation from his fans.

The Advertisement was shoot under the direction of famous filmmaker Farah Khan.

Soon after the release of the advertisement pictures, fans could not hold back and started sending love and gratitude to the player for wearing the retro jersey.

Farah Khan had posted a picture with Dhoni on her Instagram account which gained much admiration from the fans. The picture was taken during the advertisement shoot hours.

“Directed @mahi7781 for an ad today. What an amazing guy.. so punctual, so down to earth, took pics with everyone from clients to spot boys with a smile. I’m a fan now.. pic credit: @dabbooratnani nonakhrastar,” she wrote on an Instagram post.

Farah also announced that Dhoni took pictures with all present at the shoot.

MS Doni had declared his retirement from international cricket in August last year. The Chennai Super Kings (CSK) skipper will be seen again in action when the UAE brace of IPL recommences in September.