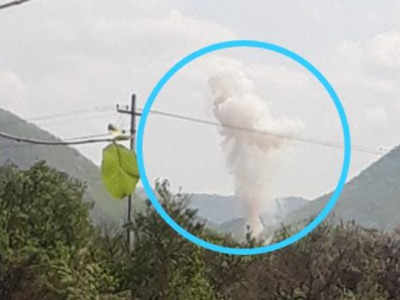 Two fire tenders from the Dahanu municipal council and Adani Thermal Power station were engaged in fire fighting operation which was obstructed by strong winds and rains.

At least 10 workers were injured in a blast inside a fire cracker factory in Maharashtra’s Palghar district on Thursday morning, the local MLA said, and added that it could have been triggered by sparks from ongoing welding work.

Dahanu MLA Vinod Nikole, who was at the spot, said the injured among the 100 workers present inside the premises of Vishal Fireworks, located at Dehane village about 15 kms from Vangaon-Dahanu Road, were rushed to the Cottage Hospital. He said most workers ran out of the unit in panic after the blast, which was heard even several kilometers away.

He said Dahanu police led by deputy superintendent of police (SP) Datta Nalawade was supervising the operation at the spot. The district administration or the fire department is yet to comment on the cause of the blast, the extent of the damage and the fire fighting operation.