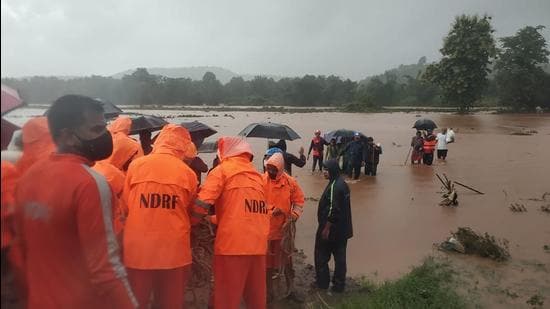 Mumbai: Chief Minister Uddhav Thackeray has announced a separate NDRF-style mechanism which will be set up in all the affected districts, The death toll due to flood and landslide in Maharashtra, rose to 149 on Sunday. Thackeray during his visit to flood-affected Chiplun also said that a financial review of the flood damage in the state will be carried out in a couple of days.

“Considering the repeated occurrence of these disasters, a system on the lines of the NDRF will be created in all the affected districts. The SDRF will be further strengthened,” the CMO Maharashtra. “We will also put a flood control system in place to ensure that such incidents do not happen in the future,” the CMO Maharashtra added.

The CMO informed that Thackeray has also said that haphazard announcements won’t be made about the compensation for the sake of popularity and that they will take a thorough review of the flood situation in the whole state and then make announcements. “We will also review the aid that needs to be sought from the Central Government,” CM Thackeray. “Directions have been given to the district collectors to provide food, medicines, clothing immediately, and other essentials to those affected,” he added.

On Sunday, 36 more bodies were found in Satara and Raigad districts, while 64 people are still missing. So far, 50 people have been injured in these incidents. A total of 2,29,074 people have been evacuated from the affected districts in the Konkan region and western Maharashtra to safer places. The state government said that 60 deaths were so far reported in Raigad, 21 in Ratnagiri, 41 in Satara, 12 in Thane, seven in Kolhapur, four in suburban Mumbai, and two each in Sindhudurg and Pune. A total of 875 villages in Kolhapur, Sangli, Satara and Pune were affected by the torrential rains.