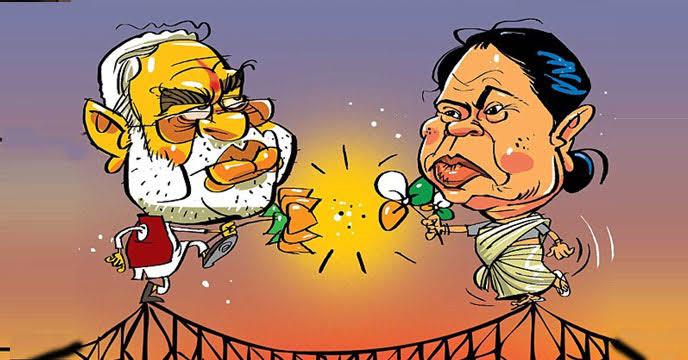 The successful win of the TMC in the West Bengal Assembly Election has proved that the people of the state are happy with Mamata Banerjee’s “poriborton” and wary of Narendra Modi’s “asol poriborton”.

Many pollsters had predicted a neck-to-neck contest between the BJP and the TMC but Trinamool Congress happily sailed off the contest by 200+ seats and BJP stuck below at 80.

The Trinamool had weaved its campaign around the Bengali identity. Not only had it dubbed the BJP a “party of outsiders”, but slogans such as “Bangla nijer meye ke chai” (Bengal wants her own daughter) screamed the banners.

Mamata campaigning on a wheelchair after hurting her leg at Nandigram seem to have created sympathy wave in her favor. PM Modi’s taunt “Didi O Didi” only strengthened it as Mamata gradually began to be seen as a victim of humiliation.

Mamata and the TMC party had clarified that they are not against non-Bengalis, but propagated that BJP will ruin Bengal’s culture. Added, accusations of partial behavior by the Centre in dealing with the Covid-19 crises, and people of Bengal seem to have reasserted their faith in Mamata.

Mamata successfully consolidated the Muslim vote bank, even in the Congress strongholds of Malda and Murshidabad. On the other hand, the Hindu vote split between the TMC and the BJP, realizing that the BJP’s accusation of Muslim appeasement against her was finding resonance among Hindu, Mamata time and again resorted to temple runs, “Chandipath” on stage and focused on her Brahmin identity.

The saffron camp will have a busy time analyzing what went wrong despite a high-pitched campaign by the Modi-Shah duo.