Mandatory hallmarking of gold jewellery has not been withdrawn, The Centre 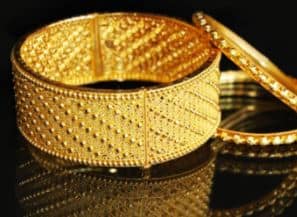 “News circulating in certain sections of social media that Government Of India’s order regarding Mandatory Hallmarking of Gold Jewellery has been withdrawn is FAKE,” according to an official statement.

The Centre has already identified 256 districts from 28 states and Union Territories (UTs) for the phase-1 implementation of gold hallmarking.

According to the Bureau of Indian Standards (BIS), “hallmarking is the accurate determination and official recording of the proportionate content of precious metal in precious metal articles.”

The BIS also said the objective behind hallmarking is to protect consumers against victimization because of irregular gold or silver quality. It also ensures that India emerges as a leading gold market globally along with developing the “export competitiveness.”

In a major move, the Centre announced in June that no penalty will be imposed till August on those jewelers who do not comply with the mandatory hallmarking of gold jewellery and artifacts.

But action will be taken on consumer complaints as per the law, the Centre said, adding complaints can be filed on the BISCARE APP or consumer engagement portal of the Union consumer affairs ministry.

Share
Facebook
Twitter
WhatsApp
Previous articleSisodia: Centre lied in Parliament that no deaths were caused due to oxygen shortage
Next articleFor the first time: Female soldiers from Saudi stand guard in Mecca during Haj