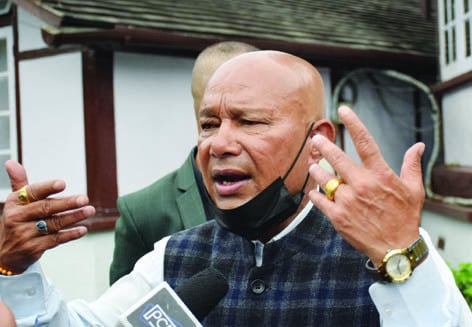 South Shillong Shullai stated that Meghalaya should utilize its police authority to defend the inter-state boundaries against “enemies”.

While addressing media, Mr. Shullai said the locals and the police force of Mizoram had proved their unity. He stated that there is unity between them for defending their identity.

“This spirit should be with us – the public and the police. If the people of Assam keep on harassing our people in the border area, the time has come not only to talk and take a tea… we have to react, we have to act at the spot only,” Mr. Shullai stated.

He further stated that the unity between the people and police force of Mizoram emerges as an example. The spirit to protect own people and land is essential. The force has been utilized for defending the identity of the land.

“If the opponents come to your residence attack you and your spouse and kids, you also have to strike in self-defense. The same applies to our borders… if your enemy proceeds to your house to take or steal your property, you have to defend yourself; whether it is right or unlawful, you ought to defend,” Shullai appended.

In front of the Parliament, Vanlalvena said that more than 200 policemen invaded our province, drove back our policemen from the posts.

The enemies gave firing signals first before we shot. They are fortunate that we have not killed all of them. But, if they seem to arrive over, we shall kill them all.

The parliamentarian has indirectly referred to Assam as ‘enemies’ while showing his support for Mizoram.