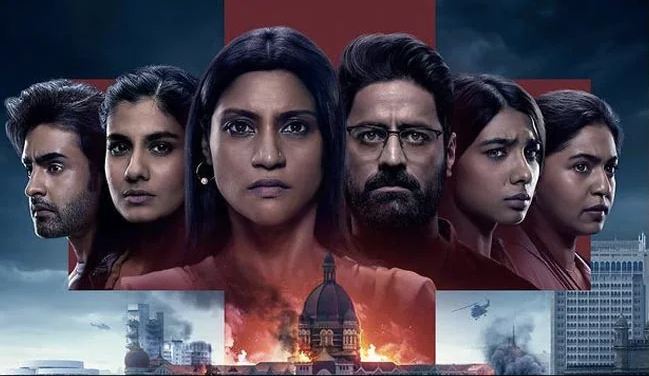 Mumbai Diaries 26/11, an eight-episode web show produced and created by Nikkhil Advani, is streaming on Amazon Prime Video currently. The web series employs few of the components of a gripping storyline with a large helping of jingoistic bellicosity of a narrative aimed at entertaining, shocking, provoking and moving the audience.

The focus of Mumbai Diaries 26/11 is principally on a crowded, chaotic and low-on-resources government hospital whose doctors and nurses are stretched to their limits as victims with gunshot wounds are wheeled in one after another on the night of November 26. It would, however, be erroneous to call the series a medical thriller. It is much more.

The show is busy trying its best to juggle with too many subplots and backstories. Most of them never come across as wholesome or convincing. Even with an immaculate cast, most of them is seen dragging a chaotic and busy narrative, putting it in an endless loop of multiple characters, their relationships and problems that is hard to keep track of or even care for, after a point. Adding more drama into the real events like the deaths of brave police officers, seems forced.

The storytelling is spot-on. It creates a wall of undisputed torment and scalded characters who confront their inner demons and tap all the grit and tenacity at their command to navigate the nightmare that none is prepared for.

The great thing about most of the principal characters in Mumbai Diaries 26/11 – women outnumber men in the cast – is that each of their stories could have yielded a standalone show. Star surgeon Kaushik Oberoi (Mohit Raina) is a workaholic professional who thrives on challenges but has the tendency to flout rules and regulations in the line of duty. He frequently runs afoul of the hospital’s chief medical officer Mani Subramaniam (Prakash Belawadi) on account of his impulsive but usually effective ways.

The social services director of the hospital, Chitra Das (Konkona Sen Sharma), accords to her job all the seriousness it deserves. She isn’t one to be cowed down by attempts by a particular doctor on the hospital’s roster to suppress her altruistic instincts. But she struggles to live down a bad marriage that has left deep scars on her mind and heart.

The multiple strands of the thriller lead inevitably to a certain degree of flaccidity especially in the initial episodes, but the series manages to retain its overall tautness all the way through, exploding into full-blown thriller mode in the sixth chapter when the terrorists turn their attention to the hospital.

The action alternates between the hospital and the hotel, where the spotlight is on F&B manager Ananya Ghosh (Tina Desai, who is absolutely terrific and stands out in the ensemble cast). She is in charge of a major medical awards event being held in the honour of Diya Parekh’s celebrity doctor-father. She has to put her life on the line in an attempt to save her guests.

A prudent take on a hard hitting story that makes restrain their principal strength in the web series. Mumbai Diaries 26/11 is an action drama that does not lose sight of the emotions that are at play as real people face unreal hurdles all in a dire day’s work.

In terms of craft and creative choices, Mumbai Diaries 26/11 is a top notch web-series one should give it a watch.