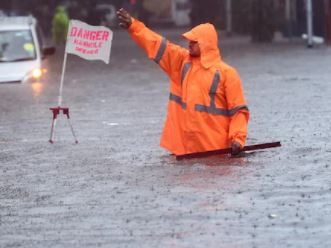 Mumbai woke up to continuous rainfall on Monday, a day after a second thunderstorm deposited nearly 235mm of rain over the city in just a few hours.

Rainfall intensity has markedly reduced, however, with the India Meteorological Department’s (IMD) monitoring station in Santacruz recording 70.4mm of rain in the 24 hours ending 8.30am Monday. Some passing thunderstorms, expected to be the last such event of this month, are likely to occur with less intensity than Sunday.

The IMD has issued an orange category storm warning for Mumbai for the next four days, indicating “Moderate to heavy rain/thundershowers in city and suburbs with possibility of very heavy to extremely heavy rainfall at isolated places.” The IMD has already issued Nowcast for possibilities of intense spells.

An off shore monsoon trough near the Maharashtra coast is likely to remain vigorous for the next few days, and Mumbai will continue to see an active monsoon spell till at least July 23, according to officials and independent forecasters.

Share
Facebook
Twitter
WhatsApp
Previous articlePM Modi: Covid Vaccine is given in ‘baahu’ and those who take it becomes ‘baahubali’
Next articleThousands of vaccinated Muslim Pilgrims circled Islam’s holiest site in Mecca